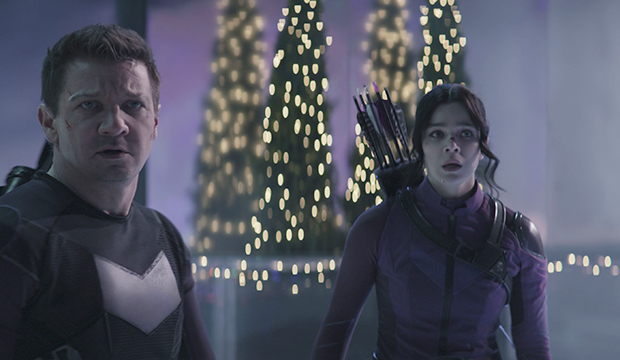 Christmas came early in the Marvel Cinematic Universe. In the Season 1 finale of “Hawkeye,” the show’s many exciting threads came together for a thrilling battle centered around the Bishop Security holiday party. Secrets were revealed, friends became enemies while enemies became friends and Clint (Jeremy Renner) finally referred to Kate (Hailee Steinfeld) as his partner. All in all, it was a successful adventure — one of Disney+’s best shows yet. But more than that, it sheds light on both Hawkeye’s past and future.

After being introduced via grainy cell phone photo in the penultimate episode, “Daredevil” villain Wilson Fisk (Vincent D’Onofrio), aka Kingpin, played a much bigger role in “So This Is Christmas?” First it’s revealed Eleanor (Vera Farmiga) is only working with Fisk to pay off her late husband’s (Brian d’Arcy James) debts. She killed Armand (Simon Callow) and framed Jack (Tony Dalton) to take the fall for Sloan Ltd. (he’s out of custody by the time the holiday party begins, though), but Eleanor now wants out of the arrangement because Kate is getting too close to the action. Naturally, Fisk doesn’t take too kindly to this and sets into motion the Tracksuit Mafia’s attack on the holiday party. Narratively speaking, it also means everyone except Kazi (Fra Fee) and the Tracksuits have turned on Fisk, since Maya (Alaqua Cox) now knows he ordered her father’s death and has subsequently orchestrated a way to leave the organization.

At the party, Kate confronts Eleanor, but the Tracksuits’ attack means everyone is suddenly on their own. Clint attempts to take on Kazi, while Kate finds herself squaring off against Yelena (Florence Pugh), who still believes Clint killed Natasha (Scarlett Johansson). Meanwhile, the LARPers — who have become the unsung heroes of “Hawkeye” even if they make things a little too easy for Clint — are working undercover as waiters. Much of the rest of the hour is dedicated to your typical Marvel third act action sequences, whether it’s Yelena and Kate fighting through various offices and then rappelling down the side of the building, or Clint taking on anonymous Tracksuits and then falling into the Christmas tree at Rockefeller Center (and befriending an owl).

Elsewhere, we see Jack taking on Tracksuits to protect Kate and Eleanor, while Maya confronts and kills Kazi when he won’t leave town with her. The biggest battle of the episode, though, involves Clint and Kate fighting side by side on the famous ice rink, using the trick arrows they made earlier in the hour to fight off a seemingly endless stream of Tracksuits. After they finish them off (thanks to another Pym arrow that miniaturizes a Trust a Bro truck), Kate goes after Fisk to save her mom and eventually knocks him out with the nifty coin-flipping trick Clint taught her. Meanwhile, Clint fights a determined Yelena. The young Black Widow refuses to believe he didn’t kill her sister, taking out her grief and pain on him even as he explains that Nat bested him and sacrificed herself to save the universe. Eventually, he uses Yelena and Nat’s secret whistle to convince her of the truth and of his bond with Nat, and the two have a lovely chat about Nat and how much Nat loved Yelena. They also talk about how much they both miss her, which adds emotional weight to Nat’s sacrifice in a way that “Avengers: Endgame” (2019) simply couldn’t.

While all of this is happening, Maya tracks down and kills Fisk, seemingly for good this time. Given the connection between the characters in the comic books, it was only a matter of time before Kingpin arrived in the larger arc of the MCU. But it’s hard to say this was a satisfying storyline for the character (though at least he had more to do than Charlie Cox in “Spider-Man: No Way Home”). If Kingpin really is dead (no one stays dead in the comics), then this was a quick and easy way to officially merge the worlds of the MCU and the Netflix Marvel shows while also tying up some loose ends from the latter. Maybe we’ll see more of Kingpin when Maya’s spin-off “Echo” eventually debuts, but it seems most likely that he’s dead and she’ll begin the show with a clean slate.

And speaking of clean slates, Clint seems to have officially put the past to bed. He arrives home on Christmas Day with Kate and Lucky the Pizza Dog in tow (Eleanor was arrested for Armand’s murder). He burns the Ronin suit and returns Laura’s (Linda Cardellini) watch. Yes, it was Laura’s all along, and a peek at the underside of the Rolex reveals she was once known as S.H.I.E.L.D. Agent 19. This might seem innocent, but in the comics, Agent 19 was known as Mockingbird. She was paired with Hawkeye professionally as well as romantically, so it makes sense Laura is Mockingbird in the MCU.

However, Bobbi Morse (Adrianne Palicki) was already introduced in “Agents of S.H.I.E.L.D.” as Agent 19. While this new information potentially threatens the ABC show’s tenuous relationship to the MCU and questions whether it is even technically canon (remember, it was produced by Marvel TV before it was folded into Marvel Studios, which means it was not led by Kevin Feige like these Disney+ shows), there’s another way to look at this as well. Laura has clearly been out of the spy game for a long time now — she and Clint have three children, the oldest of which is in his mid-teens — so it’s possible she went by Mockingbird when she was a S.H.I.E.L.D. agent and Bobbi eventually took over the Agent 19/Mockingbird alias. In fact, it’s more than possible — it’s extremely likely. The finale ends with Clint seemingly about to recommend that Kate take over the Hawkeye mantle when she begins suggesting names like Lady Hawk and Lady Arrow. Subtly revealing Laura’s former Mockingbird identity is just another way for Marvel to remind us these superhero aliases rarely belong to just one person.

For a show that received a lukewarm reception when it was first announced, “Hawkeye” turned out to be one of the best shows the MCU has produced yet. Granted, there have only been four live-action series on Disney+ thus far, but it proved viewers wrong every step of the way. Not only did we get a pitch-perfect buddy comedy that tugged on the heartstrings at all the right moments, but it also gave us the full “Save the City” number from “Rogers: The Musical” during the mid-credits sequence. More importantly, though, it allowed Clint to face his past as Ronin while coming to terms with Natasha’s death. At the same time, it introduced us to the next generation Hawkeye. And given how wonderful Steinfeld and Pugh are together as the new Hawkeye and Black Widow, it seems that the future is brighter than ever.