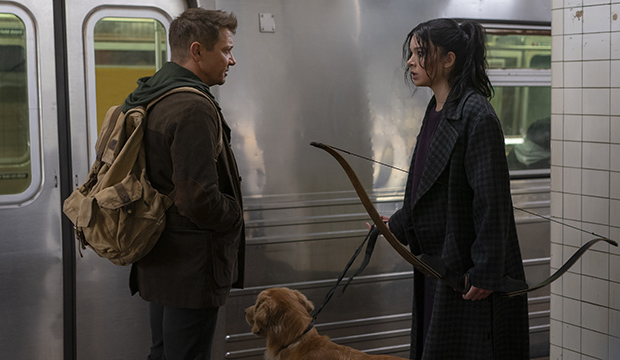 You’d be forgiven if you approached Disney+’s newest Marvel series, “Hawkeye,” with relatively low expectations. After all, despite more than a decade in the Marvel Cinematic Universe and being one of the six original Avengers, the Hawkeye character had yet to make a splash except for that time he thought about killing Quicksilver (Aaron Taylor-Johnson) in “Avengers: Age of Ultron” (2015) because “nobody would know.”

As portrayed by two-time Oscar nominee Jeremy Renner, Hawkeye — known as father of three Clint Barton in everyday life — is one of the few characters in the MCU who has no superpowers, wears no special suit, and definitely has no vibranium body parts that must be on display at all times to show he means business. Like his dearly departed best friend Natasha Romanoff (Scarlett Johansson), Clint is just a highly trained but vulnerable human, and his ordinary humanness is one of the throughlines of “Hawkeye,” which premiered Wednesday with two episodes.

In the first episode, it is six days before Christmas and Clint is in New York City with his children, taking in the new Broadway show “Rogers: The Musical” (which is definitely going to win a Tony in this universe and going to win “Hawkeye” an Emmy in ours). But it’s not long before his past as the violent vigilante Ronin — the persona he took on after his wife (Linda Cardellini) and kids were snapped out of existence by Thanos (Josh Brolin) — comes back to haunt him. The suit he wore turns up at a black market auction where Kate Bishop (Hailee Steinfeld) — a 22-year-old archer obsessed with Hawkeye after he saved her during the Battle of New York — happens to be spying on her mom’s (Vera Farmiga) new fiancé, Jack Duquesne (Tony Dalton). (In the comics, the character is known as Swordsman and has been both a hero and a villain. It seems like the show is going for the latter.) But chaos erupts when a gang known as the Tracksuit Mafia crashes the auction, and Kate attracts their attention when she dons the Ronin suit and puts all of her martial arts training to good use. We don’t know yet what Clint did during his Ronin days to piss off the Tracksuit Mafia, but he killed a lot of people, so one can assume.

SEE Everything to know about ‘Hawkeye’

So it’s a case of mistaken identity that ultimately brings Clint and Kate together at the end of the first episode, when Clint tracks her down after seeing her on the news. But it’s what happens after the two meet that matters, because this might actually be the mismatched buddy comedy we all thought “The Falcon and The Winter Soldier” was going to be. Clint is in full-on “I’m too old for this sh–” mode at this point — he’s even going deaf and has to wear a hearing aid — while Kate is an enthusiastic young woman who’s as stubborn as she is talented with a bow and arrow. They make quite the pair no matter how badly Clint wants to be rid of her and return home for Christmas.

In the second episode, after the Tracksuit Mafia sets fire to Kate’s apartment, Clint attempts to return to the scene to retrieve the suit only to discover a New York City firefighter who dabbles in live-action role-playing nicked it. This leads to what might be Renner’s best performance in the MCU, as an exasperated Clint — the number of times the closed captioning says “Barton sighs” in this show is a lot — agrees to join in the role-playing in order to get the suit back. He easily defeats everyone in his path in slow-motion, and upon approaching the thief, tells him, “I could take this pretend sword and you pretend to die and I take that suit. Or I’m gonna real punch you and you’re gonna real fall down and I’m gonna take that suit.” This is a Clint who just wants to get the job done and go home. It’s probably the most relatable anyone has ever been in the MCU since “Ant-Man and the Wasp” (2018) predicted our lives during the early days of the pandemic. His curmudgeonly ways might turn off some viewers, but not only is he missing quality time with his family around the holidays, but it’s a natural fit for the character, who has seemingly been trying to retire from the superhero business for years at this point.

In the end, Clint agrees to let the thief kill him in battle in exchange for the suit. He stashes it in a locker and then allows himself to be kidnapped by the Tracksuit Mafia, at which point he asks to — I swear to god — speak to their manager. Meanwhile, Kate goes toe-to-toe with Jack, trying to get him to reveal his true colors. She quickly realizes he’s 1) an expert swordsman, and 2) might have had something to do with the sword-related murder of his wealthy uncle (Simon Callow). She tries to call Clint to relay the news but discovers he’s been kidnapped. So naturally, the episode ends with Kate falling through a skylight while trying to rescue Clint, who up until that point had been adamant he didn’t know her. But that’s neither here nor there, because the cliffhanger of the two-episode series premiere is the reveal the Tracksuit Mafia appears to be led by Alaqua Cox’s Maya Lopez, aka Echo, a character from the comics who can mimic another person’s movements (and who already has a spin-off on the books).

While “Hawkeye” might not be as high-concept as “WandaVision,” feature a narrative with the global impact of “The Falcon and The Winter Soldier,” or have the universe-changing potential of “Loki,” it succeeds on the merits of its stars and as a street-level superhero story underscoring how and why anyone can be a hero. While these two episodes feel like the beginning of the end of Renner’s time in the MCU — it has the makings of a show about an aging mentor passing the baton to a young mentee — at least he’s (probably) going out in a way that we get to spend some quality time with him. It’s another thing he has in common with Nat, who finally got her big solo movie earlier this year.

But seeing Clint as a dad, not just to his own kids but also to Kate — who lost her dad during the Battle of New York — isn’t something we’ve seen a lot of in the MCU. It’s heartfelt, emotional territory, and when you mix that with exciting action, a well-honed sense of humor — Marvel better release a full “Rogers: The Musical” soundtrack — and the lingering darkness of Clint’s time as Ronin, “Hawkeye” has the potential to be as reliably great as the man at its center. Because while Clint Barton might not be high-profile enough to sell Halloween costumes or toys (“That’s Katniss Everdeen”), he’s still an Avenger who’s saved the world countless times. He deserves more than just scoring a free meal or being approached by creeps at the urinal. Thankfully, he’s finally getting his due.