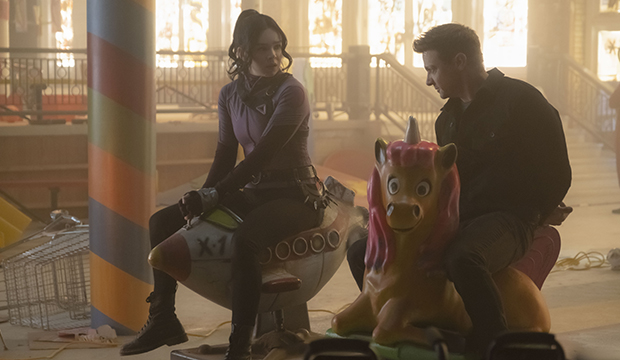 Even if you discount the show’s specific brand of humor, “Hawkeye” is a welcome change of pace from what we’ve seen before. It sits apart from the majority of the shows and movies in the Marvel Cinematic Universe because it’s a street-level action story. The fate of the world (or universe!) isn’t at stake. An entire town in New Jersey isn’t being held hostage by one woman’s uncontrollable grief. There’s no global narrative to speak of. It’s just the story of one man (Jeremy Renner), his overly eager protégée (Hailee Steinfeld), and a dog who loves pizza. Oh yeah, and a mysterious expert swordsman (Tony Dalton) and a Russian gang known as the Tracksuit Mafia.

We’re halfway through the show’s six episodes now, which means the larger narrative pieces are starting to fall into place. The episode, titled “Echoes,” opens with a brief look at Maya’s (Alaqua Cox) history, revealing that she’s been underestimated by everyone around her from a young age. The only deaf student at school, her teacher expects her to be behind her classmates, but she’s already completed her assignments. At karate practice, a bigger kid expects her to be easy to defeat because of her prosthetic leg, but she quickly proves him wrong. Everywhere she turns, Maya has to prove herself capable, and she does it with ease. Now she’s seemingly second in command of the Tracksuits, having worked her way up the ladder after Clint-as-Ronin murdered much of upper management, including Maya’s father (Zahn McClarnon), a few years ago.

A sizable chunk of the episode’s 44 minutes is spent depicting Clint and Kate’s escape from Maya — who is known as Echo in the comics — and the Imagine Dragons-loving goon squad. It gives the show a chance to highlight the characters’ hand-to-hand combat skills alongside their mastery of archery as Kate cycles through Clint’s many trick arrows during a car chase through New York City. It’s a fun sequence of events that highlights the strengths of a character who has been the least flashy Avenger for a decade-plus. But it also serves as a thorough introduction to Maya, who naturally wants to avenge her father’s death (though there is clearly something else going on as well, as we’re reminded the Tracksuits crashed the black market auction looking for something in particular).

SEE ‘Hawkeye’ premiere recap: Clint Barton is too old for this sh–

Maya destroys Clint’s hearing aid during their fight, which puts them on more equal footing and makes communication difficult for Clint for much of the outing. His inability to hear is played for laughs in his interactions with Kate — to varying degrees of success — but when Nathaniel calls and asks if he’ll be home for a Christmas movie marathon and sadly accepts that his dad might miss Christmas altogether, it’s an emotional reminder of all the times Clint hasn’t been there for his family because of his obligations as an Avenger.

As sad as this realization is, it’s somewhat of a relief to shrink the constantly expanding world of the MCU back down into a more personal story and dig into the characters, their motivations, and their humanity without also worrying about global repercussions. The ability to ground a story like this is one of the many benefits of a six-episode TV show versus a two-and-a-half-hour feature film, so while the launch of Disney+ and a desire to drive streaming subscriptions likely directly led to the creation of “Hawkeye” and the like, it benefits the characters and viewers alike. The narrative is nowhere near “WandaVision” in terms of pathos, but it puts things into proper perspective and allows us to better understand Clint and the constant battle between wanting to be a good father and wanting to help people. Kate thinks she wants to do the latter, that she has finally found her calling, but Clint cautions her about the price one has to pay to play the hero.

The episode ends with Kate and Clint breaking into Eleanor’s (Vera Farmiga) penthouse to use her computer to log in to Bishop Security in order to look for information on Kazi (Fra Fee) — who is one of Maya’s associates (and is known as Clown in the comics) — and discovers that he is employed by a company known as Sloan Limited. Kate also wants to dig up dirt on Jack, whom she still suspects is up to no good. So naturally, he interrupts their snooping with a well-placed sword to Clint’s throat, which is where the episode ends, setting up what should be yet another fun episode next week.