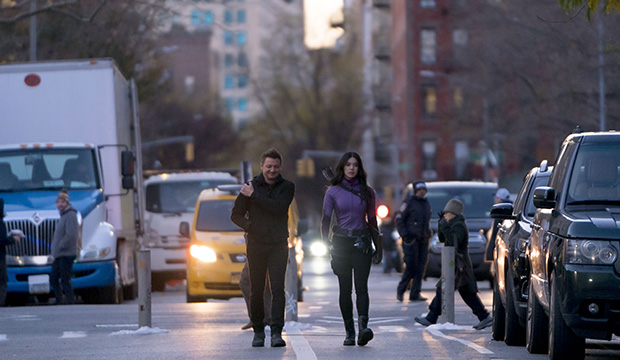 It finally happened, the day we all knew was coming but were hesitant to believe would actually come to pass: Netflix’s Marvel properties have *officially* merged with the larger Marvel Cinematic Universe, a world they were always part of but never got to participate in. That all changed in “Ronin,” the fifth and penultimate episode of “Hawkeye,” when Vincent D’Onofrio’s Wilson Fisk, aka Kingpin, became the first major character from the Netflix shows to make an appearance, even if it was only via blurry cell phone photo.

Fisk’s introduction was first teased in the third episode, “Echoes,” when Maya’s (Alaqua Cox) father (Zahn McClarnon) referenced her “uncle.” Comic book fans everywhere lost their minds because of the connections that already existed on the page, so we knew he was going to be involved with Maya, Kazi (Fra Fee) and the Tracksuit Mafia, but I’m not sure his direct connection to Eleanor Bishop (Vera Farmiga) was super evident, even despite Eleanor’s engagement to Jack (Tony Dalton) and his connection to Sloan Ltd., the shell company used to launder money for the Tracksuits. So it’s nice to get the confirmation that Eleanor is involved, since she’s been super suspicious ever since Kate (Hailee Steinfeld) overheard her conversation with Armand III (Simon Callow) in the series premiere. (Eleanor staging Jack’s arrest for Kate to see was so obviously bullsh– though that it was almost cringe-worthy.)

So now the Netflix Marvel shows have officially crossed over with the Disney+ shows (and thus the major arc of the MCU), but Fisk’s arrival is hardly the only thing that happened in “Ronin.” The episode opened in 2018, with Yelena (Florence Pugh) in the middle of her mission to save all the Black Widows from their brainwashing. But what’s interesting about this sequence of events is that we got to experience the Snap and the Blip, and how those who disappeared experienced them. One minute, Yelena was washing her face in the bathroom when she turned to dust, and the next she was back but in a bathroom that was completely redecorated.

We saw in “Avengers: Infinity War” (2018) how everyone experienced the Snap, but we didn’t get to see anyone’s return in 2019’s “Avengers: Endgame” (it would have lessened the emotional impact of what is easily one of the most exciting movie moments of the last 20 years). So it wasn’t until “Spider-Man: Far From Home” (2019) that we saw people popping up in the places they disappeared, but even then we were viewing it as casual observers (and it was mostly played for laughs). So this is the first time we’ve gotten to witness firsthand what that experience was like. And it was traumatic. Yelena lost five years of her life in a single second, and when she returned, her sister (Scarlett Johansson) was dead. So yes, definitely traumatic.

But this sequence also revealed how Yelena has become a contract killer working for Contessa Valentina Allegra de Fontaine (Julia Louis-Dreyfus). When she returned after the Blip, the former Black Widow assassin known as Ana made a quick reference to Yelena doing contract work, so it’s clear she set up a meeting. And long story not remotely short, Yelena was eventually hired by Eleanor to kill Clint (Jeremy Renner) since he keeps getting in the way (and OK, she might care a little bit about keeping her daughter safe). Yelena is adamant about completing the job she was hired to do despite the fact Kate has assured her Clint is a good guy. Their conversation over macaroni in Kate’s loft was entertaining (if a bit too long), but it’s nice to see Marvel wrestling once again with the legacy of death and destruction the Avengers have left in their wake. Clint and Yelena are similar in that they’ve both been trained to be weapons but are capable of good things, so Yelena telling Kate that “we are defined by what we do, not by nice words,” put things in perspective in an episode that also saw Clint don the Ronin suit and take on Maya — and let her live — in an attempt to put the past to bed and unite them against a common enemy.

We know Clint has done many heroic things. We also know his despair consumed him after losing his family in the Snap. But then he tried to sacrifice himself on Vormir to save half of the universe. That’s the piece of the puzzle that is still missing for Yelena, who’s been manipulated just like Maya and Kate. She believes Clint killed Natasha — or at the very least was responsible for her death — when we know Nat bested him and sacrificed herself. With only the finale left, that information is bound to come out sooner rather than later. I’m just not sure how “Hawkeye” is going to wrap everything up in one episode. There’s a lot still in play, especially now that Maya knows Kingpin wanted her father dead and someone on the inside (likely Kazi) tipped off Clint to make it happen. It puts Maya on the same side as Clint and Kate (and probably Yelena), which sets things up nicely not just for the finale but also for “Echo,” the spin-off that is already in development. However, it will be interesting to see how all of these threads come together in the “Hawkeye” finale knowing that many of these characters have been betrayed by those closest to them.