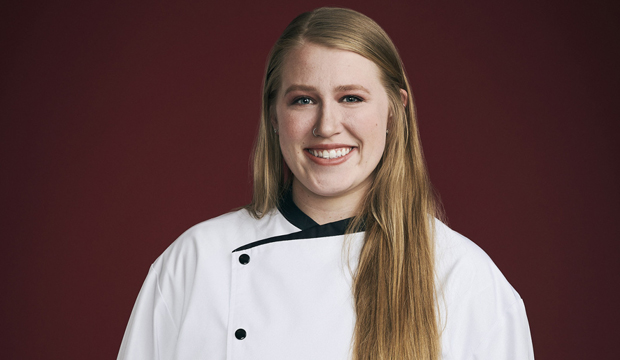 “Hell’s Kitchen” fans, mark your calendars for Monday, September 13 as that’s when the two-hour finale of Season 20 will air on the Fox network. Of the final three contestants still in the competition — Megan Gill (age 23) from Texas, Kiya Willhelm (age 22) from Maryland and Trenton Garvey (age 23) from Missouri — fans say Megan is their favorite to win. In our recent poll results, 42% of readers voted they were Team Megan, compared to 34% for Team Kiya and 24% for Team Trenton. Talk about a nail-biter!

For much of this season, Megan has flown under the radar as other, more controversial, chef-testants have gobbled up screen time. Her first big impression came in the fourth episode, when she was told to switch from the Blue Team to the Red Team in an effort to create two stronger teams. (At the same time, host Gordon Ramsay also sent Victoria Sonora and Emily Hersh to the blue kitchen and Payton Cooper and Sam to the red kitchen.)

Later on in the competition, Megan really impressed Gordon’s daughter, Megan Ramsay, who chose her soy noodles as the best dish heading into her 21st birthday dinner. But it was in the 10th episode when Megan was called out by Gordon for being the “leader” of the Blue Team, which gave her the ability to nominate her weakest teammate for elimination.

In the most recent episode, Megan earned extra credit points by being the only player to notice both of her “sabotages” when she headed the pass. She recognized orzo pasta instead of rice and zucchini instead of peas, which impressed Gordon. The other finalists all missed one or both of their “sabotages,” with Brynn Gibson being unable to recover when her emotions got the best of her.

If our readers are right that Megan will prevail, she would be the eighth “Hell’s Kitchen” winner in a row after Kori Sutton, Ariel Contreras-Fox, Michelle Tribble, Kimberly-Ann Ryan, Ariel Malone, Meghan Gill and La Tasha Mccutchen. Conversely, Season 12’s Scott Commings is the last man to claim the title, a losing streak Trenton is hoping to put an end to this year.