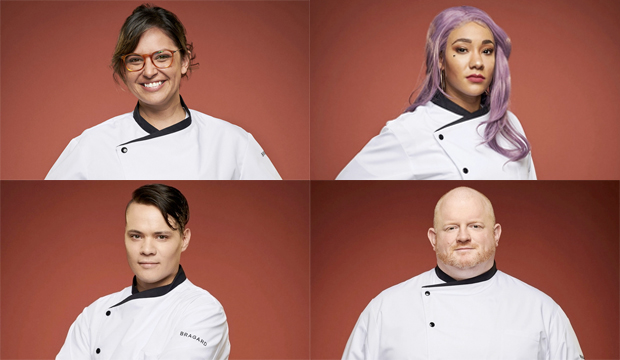 And then there were four. After this week’s episode of “Hell’s Kitchen” Season 19, only the Final 4 contestants remain in the running to win the head chef position at Gordon Ramsay‘s Lake Tahoe Restaurant. They are: Kori Sutton, Mary Lou Davis, Cody Candelario and Declan Horgan. Of these remaining talented chef-testants, who do you personally want to win? Vote in our poll below and then be sure to defend your choice in the comments section.

The fifth-place contestant, Amber Lancaster, was eliminated on Thursday night after her disastrous night on the fish station. Amber started out the competition strong as a member of the Red Team, but when she switched to the Blue Team midway through, she started getting in her head. Amber repeatedly butted heads with Declan and Cody, whom she accused of ganging up against her.

“Amber came here expecting to beat the competition, but her biggest obstacle ended up being herself,” Gordon Ramsay said after eliminating the 30-year-old executive chef from Chicago. In the host’s eyes, Amber was “inconsistent” from week to week, while the other four chef-testants are dependable no matter which station he puts them in.

Kori and Mary Lou are the last remaining members of the original Red Team. They’ve each proven their worth over the past 13 episodes, with Mary Lou earning bragging rights for earning the first black jacket thanks to her success in the “taste it now make it” challenge. When Mary Lou won the following week’s reward, she chose to keep the girls strong by bringing Kori along with her, a move that upset Cody as he was hoping he’d be Mary Lou’s plus-one.

Cody and Declan have been together since day one as members of the original Blue Team. They’ve had each other’s backs through thick and thin, including with all of the recent Amber drama. Of this duo, Declan earned his black jacket first, while Cody followed soon after by claiming victory in the “briefcase ingredients” challenge. Will Cody let his crush on Mary Lou get in his way of becoming the winner of “HK19”?

‘Hell’s Kitchen’ Final 4: Who do you WANT to win it all?
Created with PollMaker