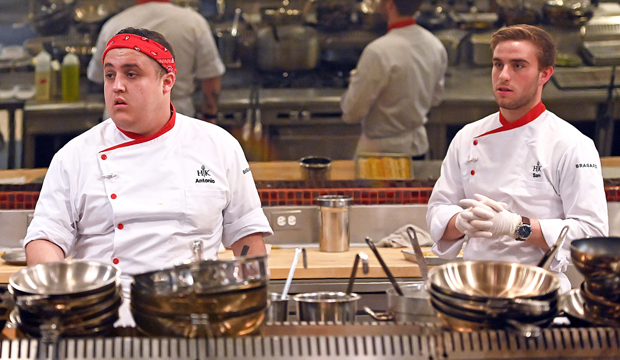 “Hell’s Kitchen: Young Guns” chef-testants Samuel Garman and Antonio Ruiz had an agreement going into their final judgment before Gordon Ramsay: neither would say a bad word about the other, and they’d let their track records be the sole determining factor of who went home. Sounds good on paper, right? When Gordon asked Sam who was the weakest link on the Red Team, Sam honored his buddy by refusing to answer. But that only angered the renowned British chef more and more. He then turned to Antonio and asked the same question, and Antonio fired back a one-word death shot: “Sam.”

“Your effort is 100%,” Gordon told Sam, who was coming off a disastrous night on dinner service in which he couldn’t properly cook chicken. “I can’t ask for a more passionate young man. But when I ask you a question, give me a f***ing answer. That is it, young man. Head up. Continue climbing the ladder and one day you’re gonna get there.”

Sam sulked out of the restaurant and expressed his disappointment over his [former] buddy on the Red Team. “I’m definitely pissed,” he grumbled. “Antonio really f***ed me over this night. That really honestly was my demise. He’s the person that should be standing here. But I’m not the type to push blame around, I’m the type to own it and learn from it. Little mistakes are what kills you and that is what happened tonight.”

Gordon later addressed his Final 7 contestants like a general on the battlefield. “Being a great chef is not only determined by what you do when things are going well,” he started. “I’m looking to see how you perform when things are going poorly. Because Red Team tonight, you could have prevented that situation from happening if somebody took control. Is that clear?”

In a private confessional, Antonio defended his choice to throw Sam under the bus. He said, “Ultimately Sam was the worst cook. It’s true. I didn’t lie. At the end of the day, he could have said my name, but he didn’t do that.” Antonio was nominated by his teammates for repeatedly messing up on the salmon and for trying to hide from a heavy workload by cooking asparagus.

Next week, Antonio, Brynn Gibson, Kiya Willhelm, Emily Hersh, Megan Gill, Steve Glenn and Trenton Garvey compete for black jackets with only five of these seven competitors earning the coveted honor. Who are YOU rooting for to receive black jackets?