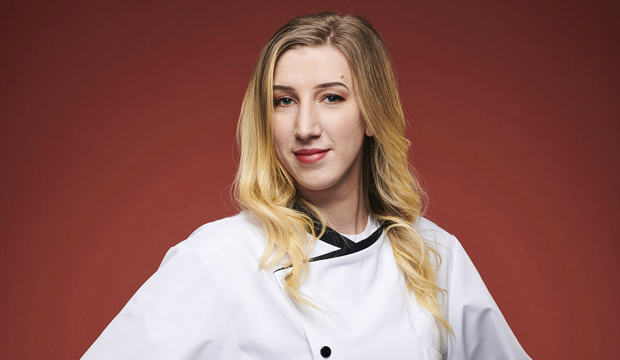 Things are winding down on “Hell’s Kitchen,” with only seven chef-testants still in the running to become the head chef at Gordon Ramsay‘s Lake Tahoe Restaurant. They are: Jordan Savell, Kori Sutton, Mary Lou Davis and Nicole “Nikki” Hanna of the Red Team and Cody Candelario, Declan Horgan and Amber Lancaster of the Blue Team. At the end of Wednesday’s 11th episode, Chef Ramsay took one more jacket, leaving six players to fight for the crown. How did it all play out?

Below, read our minute-by-minute “Hell’s Kitchen: Las Vegas” recap of Season 19, Episode 11, titled “Sink or Swim,” to find out what happened Thursday, March 18 at 8:00 p.m. ET/PT. Then be sure to sound off in the comments section about your favorite aspiring chefs on Fox’s reality TV show and who you think has what it takes to join the “HK” winners list.

8:00 p.m. — “Previously on ‘Hell’s Kitchen’!” In the 10th episode, Marc Quinones‘ journey came to an end after being on the elimination block a whopping five times. “Marc is a big talker and a decent cook, but I’m looking for someone who can lead a brigade,” noted Gordon Ramsay after sending him home. Following Marc’s elimination, only seven aspiring chefs remain in the competition. Who will be going home tonight? Let’s go!

8:10 p.m. — With the weakest link on the Blue Team gone, Amber feels like she has a target on her back. Meanwhile, a romance is budding between Cody and Mary Lou, who are feeling flirtatious over a nightly game of cards. Morning comes and the chefs are called downstairs to the first ever “Spells Kitchen,” a game to test how quickly the chefs can think on their feet. They’ll have to unscramble fruits and vegetables and then decide if they would like to assign it to one of their own proteins or pass it to the other team. With the ingredient list complete, the chefs decide which proteins they’ll cook. With everything set, each chef has 40 minutes to prepare their protein with the assigned ingredients.

8:20 p.m. — Amber hits a snag on the Blue Team when she burns her ribeye to the bottom of a pan with just a few minutes left to cook. She’ll have to salvage her dish, but lucky for her Nikki has her own troubles when she overseasons her dish. The Red Team decides to drop Nikki’s halibut dish and go with Mary Lou’s. Now it’s time to compete! First up is a battle of ribeye dishes with Kori vs. Amber. Gordon comments that Amber’s ribeye is thin, but cooked fabulously and well seasoned. Kori nails hers as well and the points are split evenly between the pair of them. Next, a battle of veal chops ensues between Jordan and Declan. Jordan nailed the meat, but the parsnips were a bit crunchy. As for Declan, his veal was delicious but his veggies were lacking as well. Once again, the points were split. Finally, it’s Cody vs. Mary Lou on halibut. Cody went a little heavy on the chili flake, but the dish worked overall. Mary Lou’s fish was well cooked, but her dish had a smear that reminded Gordon of his grandfather’s underpants. The winner is Cody and the Blue Team wins this challenge. Their reward is a pool party and BBQ while the Red Team will hand-prepping 600 tiny cookies.

8:30 p.m. — Mary Lou is embarrassed that she lost the challenge for her team and her confidence is low. Morale doesn’t increase at their torturous cookie station as he chefs slog through hundreds of delicate cookies, breaking most of them. Meanwhile, the Blue Team’s reward isn’t going as planned due to some inclement weather. They make the best of it, bonding over stories about how they started cooking.

8:40 p.m. — The reward and punishment are over and Gordon informs the chefs that Hell’s Kitchen is closed tonight. Rather than a typical dinner service, the chefs will be helping out a couple of charities close to Gordon’s heart. The Red Team will cook for contributors to the Sarah McLachlan School of Music, which provides free music education to underserved kids. The Blue Team will whip up dinner for the Chris Long Foundation, which provides clean water to developing countries. The courses kick off with scallops and Nikki is determined to prove herself to Gordon. Meanwhile, Declan has something to prove as well, refusing to allow anyone else in the Blue kitchen to cook scallops. His methods pay off as the Blue Team serves up appetizers and the Red Team is two portions short. Yikes! Better late than never, but Nikki isn’t feeling great about her first course.

8:50 p.m. — Dinner service continues with both teams nailing their risottos. Up next is the main course: halibut. Over on the Blue Team, Cody isn’t thrilled with Amber’s lack of teamwork. Kori perfectly executed her halibut and both teams are flourishing. Meanwhile, the second course is on deck, with Declan vs. Jordan on steak. Amber is frustrated because she feels like she’s doing all the work on the Blue Team and then gets snapped at for over-searing one of the steaks. At last, the Blue Team has delivered entrées to happy diners, but the Red Team has raw steaks. The Red Team finally gets the steak right and then both teams serve up dessert successfully. Without complete disaster on either team, both the Blue and Red Team are sent upstairs to deliberate one chef they will nominate for elimination.

8:59 p.m. — The Blue Team has nominated Amber for elimination while the Red Team pushes forward Jordan. Both argue for why they should stay in Hell’s Kitchen, but Gordon ultimately eliminates Jordan. His parting words for the chef: “Jordan soldiered through many battles here in Hell’s Kitchen, but tonight she lost the war.”