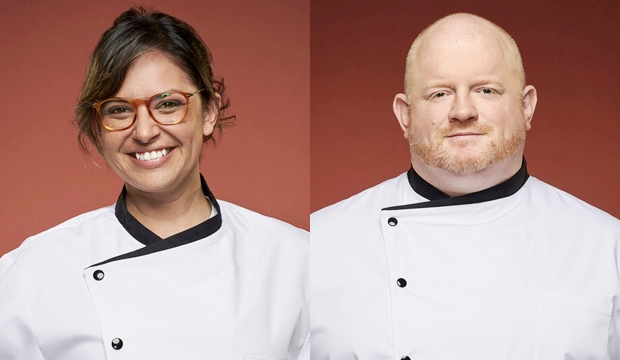 And then there were six. The “Hell’s Kitchen” cast is getting smaller and smaller, with only a half-dozen chef-testants still in the running to become the head chef at Gordon Ramsay‘s Lake Tahoe Restaurant. They are: Kori Sutton, Mary Lou Davis and Nicole “Nikki” Hanna of the Red Team and Cody Candelario, Declan Horgan and Amber Lancaster of the Blue Team. At the end of Wednesday’s 12th episode, Chef Ramsay grabbed one more jacket, leaving just the Final 5 left to fight for the crown. How did it all play out?

Below, read our minute-by-minute “Hell’s Kitchen: Las Vegas” recap of Season 19, Episode 12, titled “There’s Magic In Hell,” to find out what happened Thursday, March 25 at 8:00 p.m. ET/PT. Then be sure to sound off in the comments section about your favorite aspiring chefs on Fox’s reality TV show and who you think has what it takes to join the “HK” winners list.

8:00 p.m. — “Previously on ‘Hell’s Kitchen’!” In last week’s 11th episode, Jordan Savell‘s tour in Sin City came to an end after her fifth time being nominated for elimination. In her tearful exit interview, Jordan stated, “I gave it everything I have and I gotta make peace with that. Like Chef said, I’m a soldier. Maybe one day I’ll be a general.” Following Jordan’s ouster, only six aspiring chefs remain in the competition. Who will be going home tonight? Let’s go!

8:15 p.m. — Gordon warns the remaining chef-testants they better figure out how to stand out from the competition. Amber continues sulking up in her room about how her team is ganging up on her. Cody is frustrated with her and doesn’t think she’s owning up to her responsibility. The next morning comes and the chefs are asked to head outside in their street clothes. They’re taken to a mysterious freight elevator and then brought into a theater. The final six realize they are here to see a private showing of Criss Angel‘s “Mindfreak.” After some mind-blowing magic, the chefs head back to the kitchen where they’ll face a series of significant challenges that will prove whether or not they’re worthy for a black jacket. First up is the “Taste it, now make it” challenge. This will test their palate and ability to replicate one of Gordon’s signature dishes. After tasting the dish, the chefs all get cooking and seem to be using different ingredients. Someone’s about to be way off!

8:20 p.m. — The chefs serve up their dishes and Gordon has a taste of each. They are split between sea bass and cod, so half of them are wrong right off the bat. Declan, Mary Lou and Nikki all got the correct protein and purees, but only Mary Lou nailed the salad. She is the first chef to receive a black jacket! She’ll relax in the lounge for the rest of the day while the others slug it out. Well, all but one other chef — Gordon feels Declan’s dish was good enough for a black jacket as well. Four chefs will keep competing.

8:40 p.m. — In the next challenge each chef will choose a briefcase of mystery ingredients to prepare a delicious dish of their own creation. Everyone seems happy with the ingredients they received, so no drama there. But with minutes left to cook, Nikki realizes she has completely forgotten about the star of her dish: the lobster. How is that possible? Meanwhile, Amber is overthinking absolutely everything so my guess is neither of these two will land the next black jacket. The four remaining chefs plate their dishes and Cody is up first. Gordon calls his pork “spot on” but there’s a bit too much sauce. Next, Amber serves up black cod that Gordon calls “bland,” but everything else was “delicious.” Up third is Kori who pan seared a salmon with some spinach pesto. Gordon calls her pesto the star, but her cauliflower was bland. Last is Nikki, who overcooked her lobster tail and has a hideous looking plate. Surprisingly, Gordon loves the flavor. He has decided to give two more chefs black jackets in this round. They are Cody and Kori.

8:59 p.m. — Four chefs have black jackets and just Nikki and Amber remain in the kitchen. Amber feels like she has this last round in the bag because she has over 10 years more experience than her competitor. Amber doesn’t think Nikki has any business running a kitchen, even though Amber is an emotional wreck and is seen as generally unpleasant to work with by her teammates. Anyways, these two will compete for the final black jacket by cooking something inspired by their life. Both have settled on dishes inspired by their own mothers. With less than five minutes to go, Amber realizes her filet is still raw and she’s starting to freak out. Nikki remains calm and time is up. Amber presents her dish first: a play on her mother’s pot roast and the first dish she fell in love with when she moved to France. Gordon says her steak is cooked beautifully and Amber immediately bursts into tears. Nikki is up next, presenting Gordon an ode to her mother’s efforts to keeping her fed. An herb-panko crusted pork chop with scalloped potatoes. Gordon enjoys it, but had some critique, which makes me think Amber will get the final black jacket. At last, Gordon has made his decision. Amber has won the final black jacket. Nikki goes home in sixth place. Gordon says she’s the most improved chef he’s ever witnessed in the history of the series. What a compliment! He adds that he will personally fly Nikki to any of his restaurants around the world to staff in the kitchen.