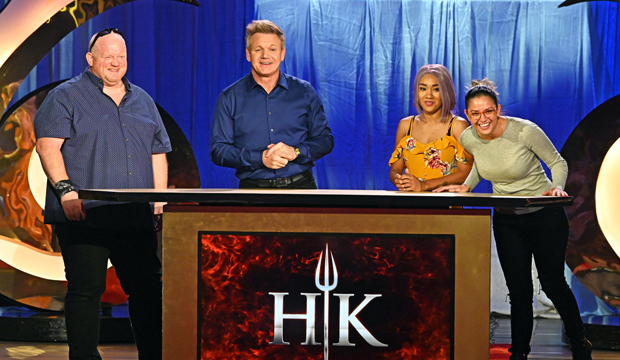 Can you feel the heat? The final three contestants of “Hell’s Kitchen” Season 19 have been named: Declan Horgan, Mary Lou Davis and Kori Sutton. But by the end of Thursday’s penultimate hour, only two still remained in the running to win the head chef position at Gordon Ramsay‘s Hell’s Kitchen Restaurant in Lake Tahoe. So which aspiring chef-testant was eliminated just prior to the season finale? And which former winner returned to the show to lend a helping hand in the latest challenge?

Below, read our minute-by-minute “Hell’s Kitchen: Las Vegas” recap of Season 19, Episode 15, titled “What Happens in Vegas,” to find out what happened Thursday, April 15 at 8:00 p.m. ET/PT. Then be sure to sound off in the comments section about your favorite aspiring chefs on Fox’s reality TV show and who you think has what it takes to join the “HK” winners list.

8:00 p.m. — “Previously on ‘Hell’s Kitchen’!” In last week’s 14th episode, Cody Candelario was sent home despite being one of Chef Ramsay’s favorite contestants. “Throughout this competition, Cody was never shy about his abilities,” the host explained. “But when it came to running the pass, he was just a bit shy, so unfortunately, it was time to say goodbye.” Following Cody’s ouster, only three people remain in the competition. Who will be going home tonight? Let’s go!

8:07 p.m. — Declan, Kori and Mary Lou head up to the dorms to celebrate being the last three standing. They’re gifted with champagne and various kitchen supplies. But late into the night Gordon calls them down to the dining room and gives them a final challenge: Create a menu that includes a cold appetizer, a hot appetizer, a seafood entrée, a chicken entrée and a red meat entrée. No pressure! They’ll be matched with one of three Sous chefs, including Season 17 winner Michelle Tribble. They all head back to the dorms and discuss their meal plans.

8:20 p.m. — The next morning Gordon calls Kori down to his office to discuss some concerns. After studying her menu, he basically tells her it’s not good enough. Gordon says there are two major components missing from her beef dish — her father and her son. Surprise! The concerns were all a joke and Kori is shocked to see her family walk through the door. She bursts into tears and heads off to spend time with them. Gordon pulls a similar prank on the others, surprising Mary Lou with her mother and cousin and Declan with his parents. It’s an emotional moment for everyone after such a stressful journey. Following time with their loved ones, Gordon gives the final three an extra surprise. They’ll hop in a limo and visit some of the hottest spots in Vegas with Gordon.

8:30 p.m. — Declan, Kori and Mary Lou start with a classy dinner at Caesar’s Palace with Gordon. Next they go through a door into an underground hallway and are seated on a bench. Slowly, they begin to rise up and find themselves center stage in front of a live audience. It’s their final cook-off! They had no idea they would be competing today, but they have 60 minutes to cook and plate their dishes! Things go relatively smoothly, other than Mary Lou having concerns about the cook of her steak.

8:45 p.m. — Each dish will be judged on a scale of 1-10. The cold appetizer will be scored by guest judge Michelle Bernstein. Declan’s tian of crab gets a 9, Mary Lou’s watermelon salad gets a 10 and Kori’s bib lettuce salad gets a 10. The hot appetizer will be scored by guest judge Tyson Cole. Kori’s truffle and mushroom risotto gets an 8, Declan’s polenta cake gets an 8 and Mary Lou’s shrimp and grits scores another perfect 10. In the seafood round, Susan Feniger will judge. She gives Declan’s fish and chips an 8, Mary Lou’s Chilean sea bass a 9 and Kori’s red snapper a 9.

8:55 p.m. — Neal Fraser will be judging the fourth round chicken course. He gives Mary Lou’s airline chicken an 8, Kori’s roasted chicken a 9 and Declan’s corn-fried chicken supreme a 10. Finally, Wolfgang Puck arrives to judge the final round. He gives Kori’s filet a 9, Declan’s filet a 7 and Mary Lou’s ribeye an 8. After all the scores are calculated, Kori and Mary Lou tie with a score of 45 and Declan finishes in third with a score of 42. Declan is eliminated from the competition and Kori will face off against Mary Lou in the Season 19 finale.

8:59 p.m. — The last eight eliminated chefs are brought back and Gordon instructs Mary Lou and Kori to draft the team that will help them win the title. Mary Lou gets to choose first because she scored more 10s in the cooking challenge. She chooses Cody, Nikki Hanna, Amber Lancaster and Lauren Lawless. Kori chooses Declan, Jordan Savell, Adam Pawlak and gets stuck with Marc Quinones. Marc didn’t seem to care that he was picked last, but Amber was highly offended she was the fifth pick. And that’s a wrap for tonight! Next week Kori and Mary Lou face off for the Season 19 title.