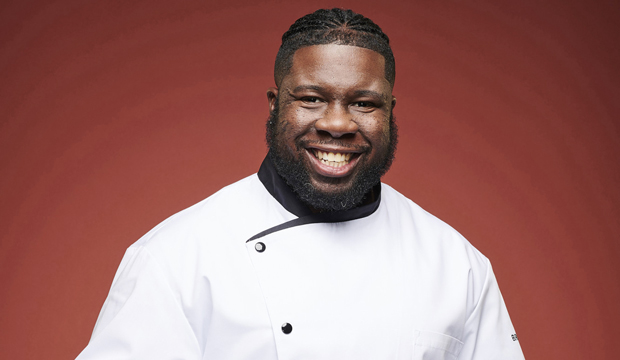 “Hell’s Kitchen” served up shrimp, shrimp and more shrimp during Thursday’s second episode of Season 19. The winner of the first individual challenge was awarded with the Punishment Pass prize that allows them to skip out on a future punishment should they lose. So who prevailed and who faltered in the shrimp extravaganza? After last week’s introductory episode in which none of the 18 new chef-testants were sent home, this week Chef Gordon Ramsay made up for lost time with a shocking double elimination. Which two contestants said goodbye before the end of the episode?

Below, read our minute-by-minute “Hell’s Kitchen: Las Vegas” recap of Season 19, Episode 2, titled “Shrimply Spectacular,” to find out what happened Thursday, January 14 at 8:00 p.m. ET/PT. Then be sure to sound off in the comments section about your favorite aspiring chefs on Fox’s reality TV show and who you think has what it takes to win the entire competition. The remaining contestants are:

8:00 p.m. — “Previously on ‘Hell’s Kitchen’!” In the first episode, Ramsay welcomed 18 contestants to Sin City and teased them with the season’s ultimate prize of becoming a head chef at his Hell’s Kitchen Restaurant in Lake Tahoe. The players were split up into women (Red Team) vs. men (Blue Team), with the males squeaking out a close victory in the signature dish challenge. Only Declan Horgan and Marc Quinones received five points for their dishes, making them the default front-runners to win this season. How will tonight’s double elimination play out? Let’s go!

8:05 p.m. — Tonight’s episode kicks off with a crate of shrimp dropping from a helicopter and crashing all over an open parking lot in front of the chefs. Gordon reveals that Las Vegas is the “shrimp capital,” serving 60,000 pounds of shrimp daily! For the next challenge they will create a stunning, fine dining dish using, you guessed it, shrimp. The winning dish will go on tonight’s opening menu. The winner will also receive the Punishment Pass mentioned above. In addition, they’ll be able to select someone from the winning team to take their place in the punishment. And, just like that, the chefs are off!

8:10 p.m. — The chefs plate their dishes after whipping up a frenzy in the kitchen, only to find out Gordon won’t be tasting them all. He will rely on the palates of sous-chefs Christina Wilson and Jason Santos. They will determine the best dishes on each of their teams. But, surprise! Gordon wants to taste the two WORST dishes on each team because he’s ready to trim some fat right now. The chef with the worst-cooked dish will be leaving Hell’s Kitchen.

8:20 p.m. — Jason names Eliott Sanchez and Kenneth McDuffie as the worst chefs on the Blue Team. On the Red Team, Christina puts Nicole Hanna and Jordan Savell on the chopping block. Gordon holds up Nicole’s shrimp and publicly scolds her for not cleaning her shrimp. What an embarrassment! Following Nicole’s dirty dish, Eliott serves up a clumpy, greasy mess that’s even worse. Jordan brings up a bleak, undercooked shrimp that’s still better than Eliott’s. Last Kenneth brings forward a “WTF?” dish containing a mystery item Kenneth can’t even explain. Apparently a block of parmesan fell in without being grated. After brief consideration, Gordon names Kenneth’s the most appalling. The 35-year old chef is immediately ejected from Hell’s Kitchen.

8:30 p.m. — After ingesting garbage from four chefs, Gordon is in serious need of a star dish. Christina names Amber Lancaster, Lauren Lawless and Syann Williams as her top chefs. Jason sends forward Josh Oakley, Declan and Cody Candelario. After carefully tasting each dish, Gordon names Syann as the winner of this challenge and her Southern-style shrimp and polenta will be on the night’s menu. She also gets to hold on to that Punishment Pass!

8:40 p.m. — Now that the challenge is over, the chefs are getting a quick lesson on the Hell’s Kitchen menu for tonight’s dinner service. After an intense day of training the chefs are sent to their stations and begin cooking up the food for patrons. Which team will be able to handle the biggest, most complex menu Hell’s Kitchen has ever seen? VIP guests are actor/comedian Wayne Brady on the Blue side and restauranteur and TV personality Lisa Vanderpump will take her seat on the Red side. Yes, Puffy is at her side. After the team plates a perfect risotto, Nicole tops it with a lobster that is “f***ing raw!” Gordon demands the flustered chef go and apologize to Lisa herself. Nicole was crying while she did it, which only added to the discomfort of the situation. Over on the Blue team, the men rocked out the scallops and are pushing out appetizers at a rapid pace. Meanwhile, Nicole continues to spiral and at this point she can’t even understand what Gordon is saying.

8:45 p.m. — Nicole can’t stop crying and Gordon is disgusted. He pulls the entire Red Team aside and asks Nicole if she’s done. She says she wants to push forward so Gordon tells her to get a grip and get back in the kitchen. She succeeds by cooking up scallops that earn rave reviews from diners so hopefully she’s back on track. Over on the Blue Team, the men hit a snag when Peter Martinez overcooks the duck, causing Gordon to fire it across the room in horror. Mary Lou Davis isn’t faring much better with her steak as Gordon throws the colorless meat to the ground. But it’s Eliott who gets the attention of Wayne at the VIP table, who feels bad for the chef after Gordon screams, “What the f*** are you doing?” at him. Wayne would like to give the chef a hug and start a hashtag, #PoorEliott. But Drew Tingley has a “hold my beer” moment as he serves up raw lamb, at which point Gordon tells him, Eliott and Peter to “F*** off!” They’ve all been ejected from the kitchen.

8:55 p.m. — The Blue Team recovers to perfectly cook the entrees for the chef’s table, only to be set back with someone’s “soft as s***” fries. Gordon slams another plate on the floor and kicks the entire team out of the kitchen. Gordon will cook Wayne’s dinner himself alongside sous-chef Jason. Meanwhile, Mary Lou has redeemed herself on the Red Team after firing up some nicely cooked New York strips. At long last, dinner service ends and Gordon calls both teams together. He says both were a disappointment, but at least the Red Team was able to bounce back and finish service. Gordon berates Drew, Eliott and Peter once again before commanding the Blue Team to head back and decide which two chefs they want to put on the chopping block for elimination.

8:59 p.m. — After some heated debate, the Blue Team has decided Drew and Eliott will be up for elimination. While being grilled by Gordon, Eliott ultimately admits that Drew is the better chef. Gordon calls for his jacket and Eliott has been sent packing from Hell’s Kitchen. Gordon says normally eliminating a chef is quite hard, “but tonight I didn’t have to eliminate a chef. I had to eliminate Eliott.” Ouch!