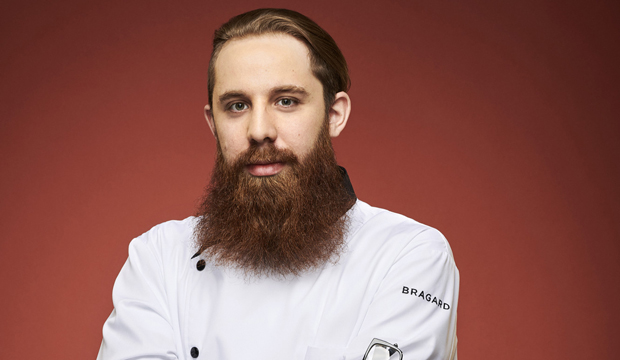 In the seventh episode of “Hell’s Kitchen” Season 19, the 11 remaining chef-testants engaged in a fun challenge in which they had to identify the proteins used in sample dishes. The winning team went to the Planet Hollywood rooftop where they engaged in a flow riding experience. The losers were punished and had to de-shell crabs for crab cakes. Chef Gordon Ramsay oversaw the night’s dinner service, but who ended up going home on Thursday night?

Below, read our minute-by-minute “Hell’s Kitchen: Las Vegas” recap of Season 19, Episode 7, titled “A Pair Of Aces,” to find out what happened Thursday, February 18 at 8:00 p.m. ET/PT. Then be sure to sound off in the comments section about your favorite aspiring chefs on Fox’s reality TV show and who you think has what it takes to win the entire competition. The remaining contestants are:

8:00 p.m. — “Previously on ‘Hell’s Kitchen’!” In the sixth episode, the Blue Team won the Italian cuisine challenge and celebrated by hitting the race track. During dinner service, Josh Oakley floundered on the garnish station and ended up being eliminated on his 29th birthday. “I’m disappointed in myself because Chef Ramsay tried to pull something out of me and I just didn’t have it,” the Denver resident said during his exit interview. Following Josh’s elimination, who will be going home tonight? Let’s go!

8:17 p.m. — Amber is humiliated by her recent nomination for elimination. She decides to keep her eye on the prize while some other chefs decide it’s time for the hot tub. Syann begins massaging Amber and things get a little erotic when she spies Lauren and Mary Lou stripping down to their bikinis. The next morning Gordon calls them all together to announce their next challenge: Tasting Surf’N’Turf, competing one at a time in teams of two, correctly guessing the protein in their dish. Jordan and Syann hold up the Red Team, unable to identify squab in their dish. Luckily, Declan is a total disaster on this challenge and can’t remember which meat he tastes from one minute to the next. The Red Team wins a reward to Planet Hollywood while the Blue Team will have to shell crabs by hand all day.

8:33 p.m. — Amber gets paranoid when Adam, Cody and Declan go outside for a cigarette and she thinks they are plotting her demise. To make things worse, she’s allergic to shell fish and is forced to shell these crabs all day. Poor Amber! There’s definitely more unity on the Red Team than the Blue Team at this point. Syann starts hitting on Adam when she returns to the kitchen, and Adam claims “big black women” love him. Day turns to night and dinner service is about to begin at the restaurant. VIP guests range from NBA stars to drag queens and begin to flood into the dining room. Syann gets an early compliment for her scallops on the Red Team, but Adam totally screws his up for the Blue Team. Over on the Red Team, the ladies have already moved on to entrees, and Syann’s luck has run out when she burns the salmon.

8:51 p.m. — Gordon calls Syann’s salmon “beautiful,” which seems like a miracle at this point. But just as things were going swimmingly, Gordon fumes when Jordan plates her dish before anyone else has finished their components of the dish. Over on the Blue Team, Amber is struggling at the meat station but gets a morale boost when Gordon says he hasn’t seen more perfectly cooked steak all season. Over on the Red Team, Kori miscommunicates some lamb and throws off the positive vibes. After a few meat dishes come up short, Gordon tells them to “F*** off” and kicks them out of the kitchen. The Blue Team will finish up the dining service while the Red Team deliberates who should go home this week. Syann is the only chef taking responsibility while the others are clearly scared and try to avoid the chopping block.

8:59 p.m. — Gordon compliments the Blue Team for serving up one of the best dinner services in Hell’s Kitchen. He then asks the Red Team to send forward their nominees: Syann and Kori. Gordon calls bullsh** and demands the two chefs on the chopping block should be Syann and Jordan. They both fight to stay in Hell’s Kitchen, but ultimately Gordon asks Syann to turn in her chef’s jacket. That’s a wrap for tonight.