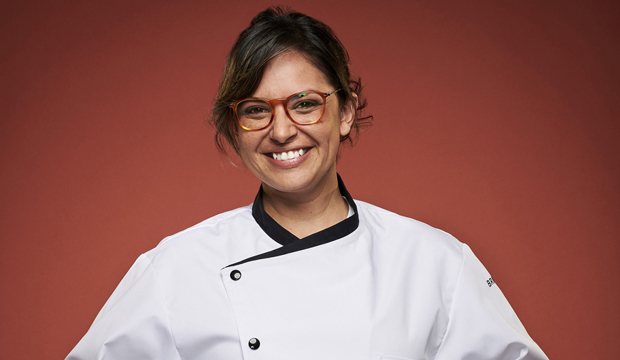 One of the most popular “Hell’s Kitchen” challenges ever, the blind taste test, has finally arrived in Season 19. In this week’s episode, the nine remaining chef-testants wore blindfolds and tried to identify mystery ingredients presented to them by Chef Gordon Ramsay. The twist: if a person missed two ingredients, ice cream would be dumped onto one of their teammates. The winning team was rewarded with a helicopter ride around the Grand Canyon and a hotel stay at Caesar Palace’s private villa. The losers were punished and had to prepare countless steaks for dinner service. At the end of the night, which contestant ended up having to turn in their jacket?

Below, read our minute-by-minute “Hell’s Kitchen: Las Vegas” recap of Season 19, Episode 9, titled “Blind Taste Test,” to find out what happened Thursday, March 4 at 8:00 p.m. ET/PT. Then be sure to sound off in the comments section about your favorite aspiring chefs on Fox’s reality TV show and who you think has what it takes to win the entire competition. The remaining contestants are:

8:00 p.m. — “Previously on ‘Hell’s Kitchen’!” In the eighth episode, Lauren Lawless‘ journey came to an end after she lost the cook-for-your-life challenge. During her exit interview, she revealed, “Going out for having an underdone steak with two minutes more to go, it really sucks.” Following Lauren’s elimination, only nine aspiring chefs remain in the running to become the head chef at the Hell’s Kitchen Lake Tahoe Restaurant. Who will be going home tonight? Let’s go!

8:05 p.m. — Amber is still upset that she was on the chopping block last week instead of Adam, but Declan basically tells her to get over it and cook. Meanwhile, Adam claims he’s purposely flying under the radar so he can shock everyone at the finale. The next morning the mood lightens as Declan sports one of Mary Lou’s blond wigs. He’ll be going as “Donna” for time being, a “tiger of a woman.” Later on Gordon calls everyone down to the dining room so Declan yanks off his lovely locks and the chefs head down to hear their next challenge.

8:25 p.m. — Tonight’s challenge is the blind taste test! In Round 1 Declan defeated Nikki 4-0, which led to Jordan being covered in ice cream, chocolate sauce and cherries as she sat on the sidelines! In Round 2 Kori defeated Adam by a score of 3-1, turning Declan into an ice cream sundae. In Round 3 Mary Lou and Amber tied with two points each, dropping just a few pounds of ice cream on Kori and Adam. In Round 4 Jordan and Cody tie with two points as well, bringing us to the final round, Kori vs. Marc. The final pair tie, but the most overall points belongs to the Blue Team! Their reward is a helicopter tour of the Grand Canyon, followed by a night in Caesar’s Palace, where they will spend the night in a private villa. Hell’s Kitchen is closed tonight! For their punishment, the Red Team will prep steak ahead of tomorrow night’s dinner service.

8:40 p.m. — With the lavish reward and the torturous punishment over, Hell’s Kitchen is back open for steak night! Jordan starts off on the right foot for the Red Team, nailing her risotto. Over on the Blue Team Marc messes up the scampi and fails to communicate, causing Gordon to get frustrated. He recovers with some decent shrimp, but the Red Team has already moved on to entrees. Mary Lou is excited to be leading the team tonight and things are running smoothly with Nikki nailing her first salmon dish. Over on the Blue Team, communication troubles continue as Adam basically refuses to speak to anyone. It’s kind of bizarre because he can clearly hear people yelling at him. Things get worse when Cody forgets to cook a steak. Yikes! Over on the Red Team, Kori is absolutely KILLING IT on the meat station and appears to be the star of the night.

8:50 p.m. — Things escalate as Gordon tells the Blue Team to “Go f*** themselves!” Who screwed up the eggs??? Frustrated by the lack of leadership, Gordon tells them they need to get on the same page and listen to how well the Red Team is communicating. After the short pep talk, Marc immediately screws up the meat order and Gordon has had enough. They’re “pathetic” and have to go decide who is up for tonight’s elimination. Meanwhile, the Red Team completes a brilliant dinner service.

8:59 p.m. — In deliberation, the team tells Marc he completely failed at communicating. Adam says he’d put up Cory as the second chef on the chopping block, but Cody pushes back saying Adam has no leadership skills. Back in the dining room, the nominations for elimination are officially Marc and Adam. While fighting for their place in the competition, Marc goes on an exhausting rant, which may have shown more passion than his counterpart. Gordon calls for Adam to turn in his chef’s jacket and the bearded cook is the latest contestant exiting Hell’s Kitchen. “Adam started the competition strong, but unlike his beard, Adam stopped growing,” were Gordon’s parting words.