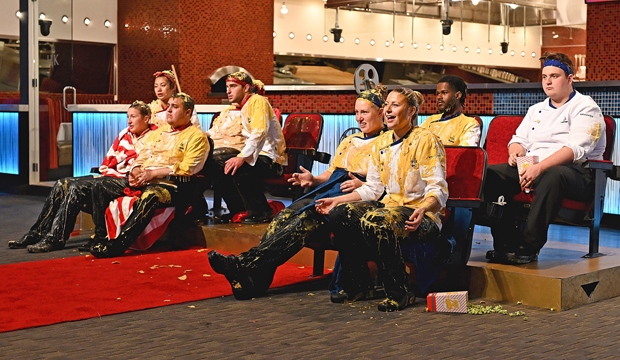 Things got sticky during Monday’s episode of “Hell’s Kitchen,” as the final nine chef-testants competed in everyone’s favorite challenge, the Blind Taste Test. If a person got their ingredients wrong, their teammate would be covered in messy substances like caramel, nacho cheese and popcorn. Later, one team came unhinged during dinner service. A lot is at stake this year for the ultimate winner, as they’ll claim a head chef position at Gordon Ramsay‘s steakhouse at the Paris Hotel in Las Vegas.

Below, read our minute-by-minute “Hell’s Kitchen: Young Guns” recap of Season 20, Episode 10, titled “More Than a Sticky Situation,” to find out what happened Monday, August 16 at 8:00 p.m. ET/PT. Then be sure to sound off in the comments section about your favorite aspiring chefs on Fox’s reality TV show and who you think has what it takes to join the winners list. Here are the current “HK20” team breakdowns:

8:00 p.m. — “Previously on ‘Hell’s Kitchen’!” In the ninth episode, Victoria Sonora handed in her jacket in part because she wasn’t quite “ready” to be Chef Ramsay’s protege. “I knew it and he knew it — I wasn’t ready then, but DAMN that was incredible,” she stated after exiting the show. “Low key just happy to have made it past day one.” Following Victoria’s ouster, only nine contestants are still in the running to win Season 20. How will tonight’s episode play out? Let’s go!

8:05 p.m. — Following last week’s awkward elimination, the Red Team seems to be having some drama with Josie. While the Red Team sits outside discussing their issues, Josie remains inside complaining to the Blue Team that her teammates “hate” her. The next morning Gordon transforms Hell’s Kitchen into a movie theater where he shows a documentary about the annual blind taste test. It’s about to happen right now! Each chef will taste four different ingredients that will test their palates. The team that correctly identifies the most ingredients after five rounds will win this challenge. For each incorrect answer, one of their teammates will have movie snacks poured all over them.

8:20 p.m. — First up are Antonio and Steve tasting cauliflower. Steve thinks it’s celery and Antonio guesses corn. This isn’t off to a very good start! After four ingredients the Blue and Red Team are tied 1-1 and Sam and Megan are absolutely drenched in caramel, popcorn, nacho cheese and tortilla chips. After Kiya and Trenton take their turns at being blindfolded, the teams are still tied 2-2. Round 3 is Brynn vs. Megan and ends with the Blue Team ahead 5-4. Round 4 is Josie vs. Emily and finishes with the Blue Team leading 8-6. The last round is Megan vs. Sam and the Blue Team ends up winning the challenge. They’ll take a VIP party bus to a bowling alley while the Red Team stays back and cleans up the giant mess that was just made.

8:30 p.m. — Brynn has decided to use her punishment pass and swaps places with Steve. He will be demoted to cleaning crew while she enjoys the good life. Steve has a good attitude about it and says Brynn is “smokin’ hot” so he can’t stay mad at her too long. It doesn’t pertain to this competition, but Emily is by far the worst bowler and deemed “Gutter Girl.” Back in the kitchen, the Red Team is tired of Sam’s constant complaining while they clean up the disgusting remains of the last challenge. After picking up an unknown amount of tortilla crumbs by hand, Steve isn’t taking this punishment with such a good attitude anymore, lol.

8:40 p.m. — Hell’s Kitchen is open for dinner service with VIP guests Gabriel Iglesias and Melissa Joan Hart. The Red Team hopes to overcome their issues and Kiya wants to step up as the leader. She kicks things off with beautifully done scallops while the Blue Team is off to a rocky start with Steve’s botched risotto. Things move smoothly from there as both kitchens begin work on their entrees. The Red Team hits a snag when Josie brings up the wrong garnish for the Beef Wellington. Over on the Blue Team, Megan rocks her salmon but Emily is struggling to keep her head above water.

8:45 p.m. — Josie’s struggles continue on garnish and Gordon pulls her and Sam aside and tells them to communicate. Next, Gordon pulls Steve into the pantry and asks, “What’s wrong?” He gives him a tongue lashing for lacking passion and screams, “If you don’t want it, then give me your jacket!”

8:50 p.m. — Steve doesn’t want this day to define him and heads back into the kitchen with more fight. Meanwhile, Megan is holding down the fort for the Blue Team by serving up beautifully cooked fish. The Blue Team is running smooth with Trenton holding solid on the meat station. Both teams finish strong and tonight’s elimination will come down to the smallest mistakes. Gordon notes that he saw leadership in the Blue kitchen from Megan. He also says Kiya stood out on the Red Team with immaculate fish and leadership. He instructs Megan and Kiya to head back to the dorms, have one-on-ones with each of their teammates and choose one person to nominate for elimination.

8:59 p.m. — Josie and Steve have been nominated for elimination. Steve fights for his life with a fury and Josie quietly says, “I have so much left” through her tears. Josie is promptly eliminated, but Gordon says there is a “gutsy chef” within her. Gordon’s final words: “Josie may have come a long way in this competition, but right now she still needs more time to grow.”