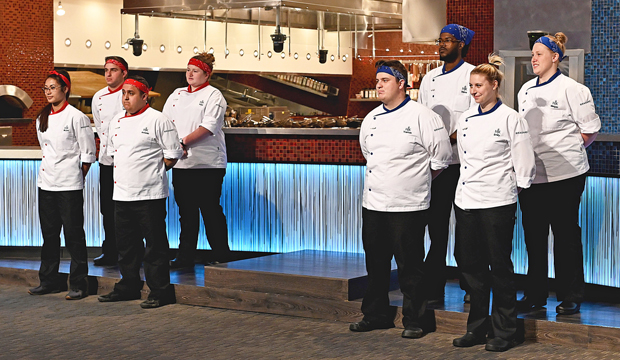 And then there were eight. On Monday night, the remaining “Hell’s Kitchen” chef-testants played a dating game on the fictional “hkchefsonly.com” app in the hopes of swiping right on the perfect set of ingredients for their entrees. Later during a steak-themed dinner service, one team struggled with overcooking its dish. A lot is at stake this year for the ultimate winner, as they’ll claim a head chef position at Gordon Ramsay‘s steakhouse at the Paris Hotel in Las Vegas.

Below, read our minute-by-minute “Hell’s Kitchen: Young Guns” recap of Season 20, Episode 11, titled “Swiping Right,” to find out what happened Monday, August 23 at 8:00 p.m. ET/PT. Then be sure to sound off in the comments section about your favorite aspiring chefs on Fox’s reality TV show and who you think has what it takes to join the winners list. Here are the current “HK20” team breakdowns:

8:00 p.m. — “Previously on ‘Hell’s Kitchen’!” In the 10th episode, Josie Clemens was eliminated after being nominated by the temporary Red Team leader, Kiya. “Josie may have come a long way in this competition, but right now she still needs more time to grow,” Gordon said after taking Josie’s jacket. The Blue Team’s leader, Megan, nominated Steve for elimination, but he was spared. Who will be going home tonight?

8:10 p.m. — It’s a new day in Hell’s Kitchen and the Top 8 are called to the dining room for their next challenge. There’s a giant cell phone displaying a fake dating app for chefs, but they’ll be using it to match ingredients with one of four proteins: lobster, filet mignon, New York strip or pork chop. Each team has four members so they’ll have to decide who is cooking which meat. Brynn and Steve will face off first, taking turns choosing ingredients for a lobster dish. Next, Emily and Antonio choose for pork chops, Kiya and Megan choose for the filet and Sam and Trenton choose for the strip. Next, each player has to pick out one more secret ingredient with a blindfold on.

8:20 p.m. — Megan hits the blooper reel when she tosses a parsnip into the blender without the lid on. It explodes in her face, but she’s alright! Just a little embarrassed after the rookie mistake. Everyone finishes up their dishes and Gordon introduces guest judge Richard Blais to score each plate. Lobster is up first and Richard gives both Steve and Brynn one point. In round two, Megan scores a point for the Blue Team, but Kiya fails to score for the Red Team. In round three, Antonio evens up the score over Emily. With the score tied, it all comes down to Sam vs. Trenton with their New York strips. Richard isn’t impressed with either, so no point is earned. As the tie-breaker, Richard picks his favorite dish of the day, which belongs to Steve. That gives the Blue Team another challenge win! They will be pampered at the most luxurious spa on the strip. The Red Team will be elbow deep in toilets and cleaning up the dorms.

8:35 p.m. — It’s time for dinner service and Brynn looks a little frazzled. She’s spilling things all over the kitchen so Kiya goes around giving everyone hugs in hopes of calming the team down. With only four chefs in each kitchen, communication is more important than ever. Kiya seems to be taking a leadership role on the Red Team and sends out some stunning risotto. Megan’s risotto was a little less appetizing for the Blue Team, but she quickly corrects her mistakes and both teams are serving up entrée’s. The Red Team hits a snag when Antonio and Sam both serve up poorly cooked salmon and steak. While waiting for them to fix their mistakes, Gordon grows increasingly impatient.

8:45 p.m. — “It’s still raw!” Gordon shouts while holding out a piece of salmon in front of Sam and Antonio. These two are not looking strong. Over on the Blue Team it’s Emily struggling on the meat station after she forgets to sear one of her steaks. It takes her extra time to get the steak finished which leads to an overcooked salmon from Steve. Just like the Red Team, the Blue Team is struggling to serve up the meat. Back on the Red Team, Sam is so paranoid now that he will send up raw chicken he begins to overcook it and pisses Gordon off even more. Over on the Blue Team, Steve is determined to nail their second chance and is triple checking everything. The strategy works and the Blue Team is off and running.

8:55 p.m. — Gordon is screaming at Antonio to help Sam with the chicken. He thinks Antonio is scared to screw up the meat and he’s hiding at the vegetable station. The Red Team is a mess! The Blue Team completes their dinner service and ends on a high note, likely guaranteeing safety for all of them. The Red Team sends up chicken for the fourth time and it’s raw. Gordon has had it and kicks the whole team out of the kitchen. The Red Team will have to choose two nominees for elimination and it’s pretty clear those nominees need to be Antonio and Sam.

8:59 p.m. — As expected Antonio and Sam have been nominated for elimination. When asked who is the weakest chef, Sam can’t come up with an answer. It’s hard to watch. Next, Gordon asks Antonio the same question and he quickly names Sam. Gordon asks Sam to turn in his jacket. Gordon’s final words: “Sam struggled with chicken all night and then struggled to give me a straight answer. I had no struggle taking his jacket.”