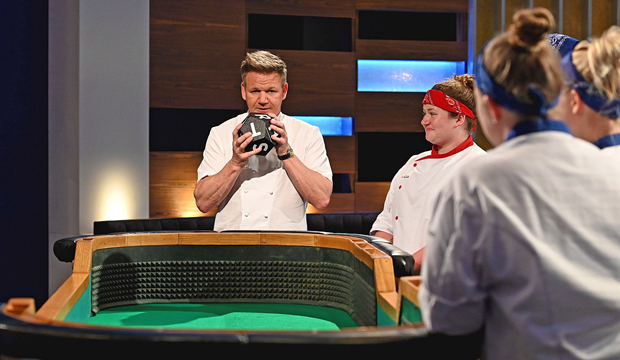 Heading into Monday’s episode of “Hell’s Kitchen” Season 20, only seven chef-testants remained in the running to win the show. They were: Antonio Ruiz, Brynn Gibson and Kiya Willhelm of the Red Team and Emily Hersh, Megan Gill, Steve Glenn and Trenton Garvey of the Blue Team. This week the players had to prove they were worthy of receiving a coveted black jacket. A lot is at stake this year for the ultimate “HK20” winner, as they’ll claim a head chef position at Gordon Ramsay‘s steakhouse at the Paris Hotel in Las Vegas.

Below, read our minute-by-minute “Hell’s Kitchen: Young Guns” recap of Season 20, Episode 12, titled “All Hell Breaks Loose,” to find out what happened Monday, August 30 at 8:00 p.m. ET/PT. Then be sure to sound off in the comments section about your favorite aspiring chefs on Fox’s reality TV show and who you think has what it takes to join the winners list.

8:00 p.m. — “Previously on ‘Hell’s Kitchen’!” In the 11th episode, Samuel Garman was eliminated after failing repeatedly to properly cook chicken. Yes, chicken. “I’m definitely pissed,” Sam grumbled during his exit interview. “Antonio really f***ed me over this night. That really honestly was my demise.” He was referring to the fact that Sam and Antonio had agreed not to throw each other under the bus in front of Chef Ramsay, an agreement Antonio completely ignored. When the host asked both of them who was the weakest chef, Sam didn’t answer while Antonio responded simply, “Sam.” But enough about last week. Who will be going home tonight?

8:05 p.m. — Gordon explains the job of a chef is to take ordinary ingredients and turn them into something extraordinary. After a circus-like performance by guest performer, Gordon announces the Top 7 will now compete in a series of challenges for five black jackets. Since they’re in Vegas they will use a giant slot machine to determine their ingredients. By the end of the hour two of these chefs will be eliminated.

8:10 p.m. — The chefs have 45 minutes to complete the first challenge. Two of them will receive black jackets when it concludes. Megan struggles with her lobster because she’s not a fan of seafood and feels awful when she has to kill the live sea creature. Brynn is also concerned because she has never cooked her main ingredients tonight, polenta. With two minutes remaining the chefs begin to plate their dishes with finesse.

8:25 p.m. — Jason Shkorupa, Vice President of Food & Beverage at Sunseeker Resorts, arrives to help Gordon choose the winners of the first challenge. Trenton is up first with a pan-roasted rack of lamb. Jason likes the consistency of the puree and Gordon thinks it tastes delicious. Steven is next with peppercorn New York strip and broccolini. Jason and Gordon agree it has a little too much pepper. Kiya has prepared a pan-seared salmon, which was cooked beautifully, but she shouldn’t have poured her beurre blanc all over the crispy skin. Megan’s lobster needs a little more seasoning. Emily serves “significantly overcooked” shrimp on her puree. Brynn presents a filet that is beautifully cooked, but the polenta is lost in the dish. Antonio’s seared scallops with pickled peas looks like a “crime scene” according to Gordon, but is beautifully cooked. After a short discussion, Gordon and Jason have decided that the first chefs earn their black jackets are Trenton and Brynn.

8:30 p.m. — For the next challenge the chefs will all cook with the same ingredients: Blue fin tuna, rice, pepper, turnips, heirloom tomatoes, lemons and black truffles. The ingredients were determined by each chef rolling a dice with letters on it. Whichever letter the dice landed on, the person rolling had to pick an ingredient starting with that letter. The chefs have 45 minutes to complete this challenge. Kiya seems to be struggling with the tuna steak because she’s never prepared tuna that didn’t come from a can. Emily hoped to make sushi but she couldn’t get it to roll correctly and had to abandon her plan.

8:40 p.m. — Emily presents a tuna rice salad and she’s crying as she sets it on the table. Gordon says, “You know it’s a mess, right?” and sends her back in line. Kiya’s tuna is cooked beautifully and Gordon calls it a “very solid effort.” Steve’s plate looks nice and tastes “refreshing,” but Gordon warns that the Tuna is sliced too thinly. Antonio is criticized for sticking truffles in his tomato jam. Megan’s tuna is “spot on” with a delicious glaze, but the rice isn’t presented well. Gordon takes a moment to think and then hands out two more black jackets to Megan and Kiya.

8:50 p.m. — There are three chefs competing for the final black jacket. Gordon shows each chef a video message from home, which brings out plenty of emotion. He instructs them to “tell their story” on a dish. They have 45 minutes to plate something inspired by their family. Emily mistakes a porterhouse steak for a ribeye, but it won’t stop this vegan from grilling up some meat for the final challenge.

8:55 p.m. — Antonio presents enchiladas verdes with chicken thighs inspired by his father. Gordon thinks the chicken is cooked beautifully, but it needs a touch more seasoning. Emily has plated steak in honor of her “grill master” father. Gordon loves Emily’s Brussels sprouts, but her steak is unevenly cooked. Steven presents shrimp and grits because it’s his grandmother’s favorite dish. Gordon says the shrimp is cooked beautifully, but the dish is missing acid.

8:59 p.m. — The first chef eliminated after the final challenge is Emily. The second chef eliminated is Antonio. Steve has received the final black jacket for cooking one of his most “passionate dishes” to date.