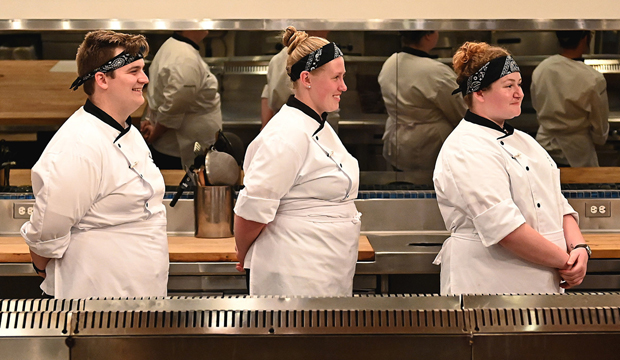 Heading into Monday’s two-hour finale of “Hell’s Kitchen” Season 20, only the Top 3 chef-testants remained in the running to win: Trenton Garvey, Megan Gill and Kiya Willhelm. In the first hour, the players were treated to a helicopter ride around Las Vegas before having to cook a five-course meal in front of a live audience. Later, the two finalists competed head-to-head, with former contestants serving in their kitchen brigades. A lot is at stake this year for the ultimate “HK20” winner, as they’ll claim a head chef position at Gordon Ramsay‘s steakhouse at the Paris Hotel in Las Vegas.

Below, read our minute-by-minute “Hell’s Kitchen: Young Guns” recap of the two-hour Season 20 finale, Episode 15 (“What the Hell”) and Episode 16 (“Two Young Guns Shoot It Out”), to find out what happened Monday, September 13 at 8:00 p.m. ET/PT. Then be sure to sound off in the comments section about your favorite aspiring chefs on Fox’s reality TV show and tell us what you think about who won.

8:00 p.m. — “Previously on ‘Hell’s Kitchen’!” In last week’s two-hour episode, Steven Glenn was eliminated for not being vocal enough in the kitchen and Brynn Gibson was ousted for being too emotional. That left only Trenton, Megan and Kiya still in the competition. So who will win? It’s time to find out!

8:10 p.m. — Kiya, Megan and Trenton have little time to celebrate their Top 3 status when Gordon calls them all back to the dining room shortly after they crack open a bottle of wine. Just 30 minutes before midnight, Gordon has another challenge up his sleeve before the grand finale. Each chef will have to design a stunning menu featuring one cold appetizer, one hot appetizer and three entrees including one seafood, one red meat and one surf-n-turf dish. They will be helped out by sous chefs Christina Wilson (assisting Megan), Jason Santos (assisting Kiya) and Michelle Tribble (assisting Trenton). Kiya is nervous because she’s never created her own menu. She asks if she can use deer meat, but Jason thinks that will limit her. He helps pull her in a different direction with some delicious seafood options. Megan’s menu seems to come naturally with a mix of femininity and Texas staples. Trenton leans on his Arkansas roots and fruity salads.

8:20 p.m. — After a long night of menu planning and very little sleep, the chefs wake up for one-on-one menu meetings at Nobu with Gordon. He surprises each of them with visitors from home including Megan’s parents, Kiya’s mom and sister and Trenton’s girlfriend and father. The all get some time to connect before the competition continues.

8:30 p.m. — Gordon gets the three remaining chefs gussied up with their own stylist, hair and makeup person. Next they take a limo to a helicopter and fly over the Vegas strip to their final challenge. In front of their family, friends, former competitors and fans, the competitors will have to cook five amazing dishes. The top two finishers will lead their kitchens in tomorrow night’s final dinner service. One will become the Season 20 winner. The final challenge starts now!

8:45 p.m. — The Top 3 are cooking up their menu alongside their sous chefs in hopes of winning over Gordon. They put their hearts and souls on a plate and it’s time for their final judgment. Each of the five dishes will be judged by five guest judges and rated on a scale of 1-10. Ming Tsai rates the cold appetizers first giving Kiya’s bruschetta salad a 10, Trenton’s watermelon salad a 10 and Megan’s berry salad a 9. Next Jennifer Jasinski rates the hot appetizers giving Trenton’s pea risotto a 9, Megan’s pan-seared scallops an 8 and Kiya’s Asian chicken lollipops a 9. Judging the seafood entrée is Aaron Sanchez and he rates Megan’s salmon a 9, Kiya’s salmon an 8 and Trenton’s trout a 10.

8:55 p.m. — With just two dishes left, this race to the final dining service is tight! Trenton is leading with 29 with Kiya in second place at 27 and Megan right behind with 26 points. Roy Yamaguchi judges the red meat entrées and gives Trenton’s steak a 10, Megan’s ribeye an 8 and Kiya’s steak an 8. The final surf-n-turf dish is judged by Aaron Franklin and he gives Kiya’s filet & crab cake an 8, Trenton’s steak & shrimp a 9 and Megan’s filet & shrimp a 10. Trenton sails into the finale with a total score of 48. Megan squeaks through in second place with 44 points. Kiya will say goodbye in third place, missing the final dinner service by one point with a score of 43.

9:00 p.m. — Trenton and Megan will now have to choose their teams for the final dinner service from the eliminated chefs who have gone before them. Since Trenton received the highest score in the final challenge, he will choose first. Trenton’s team will include Kiya, Antonio Ruiz, Brynn Gibson and Sam Garman. Megan’s team will consist of Steve Glenn, Victoria Sonora, Emily Hersh and Josie Clemens. It’s interesting that Trenton chose Kiya as his first pick considering how much she hates him. Meanwhile, Josie calls Megan’s team a band of misfits, so this should be an interesting final dinner service!

9:10 p.m. — Prior to dinner service, Trenton wants to put his past conflicts with Kiya and Brynn behind him. Kiya says Trenton is not a good team leader and she and Brynn hate him. Emily thinks Megan is a humble leader and says she’s afraid of sounding “bossy.” As the chefs head into the kitchen, Trenton tells his team to “shut the f*** up” and “get on the same page.” Megan starts by asking everyone if they’re okay. Which style of leadership will prevail? Kiya feels disrespected by Trenton and it makes her unmotivated to do her best. Megan is on the opposite side of the spectrum, almost fearful of delivering the slightest criticism to her teammates.

9:20 p.m. — Megan’s sous chef Christina pulls her aside and tells her to quit asking the team to complete tasks. She needs to take control and be more demanding if she wants to win. Gordon gives Megan’s and Trenton’s final dishes one more lookover and offers some advice. He says Josie is overcooking Megan’s chicken and the vegan needs to be put in check. Trenton’s entrée is too small and he needs more seasoning on his chicken. Later Gordon pulls Megan and Trenton both into the dorms and confronts them with a bag of marijuana that was found. He threatens to disqualify whoever is responsible and demands the truth. Megan and Trenton both look mortified.

9:30 p.m. — Gordon has security guards open up the bags of “joints” and reveals they are actually head chef jackets for Megan and Trenton. It was all a prank to scare the finalists before their dinner service. Gordon has a fun laugh while Megan nearly begins to cry. Next he gives each of them a pep talk and tells them he’s proud of them and he wants them to own every ticket. The finalists must take charge and be the boss tonight. Then he opens up a brief case with $250,000 of cash in it. That is what’s at stake. After introducing themselves to the diners, Megan and Trenton head into the kitchen and begin the final dinner service.

9:40 p.m. — Trenton’s kitchen hits a snag with Antonio’s undercooked risotto. Trenton provides some coaching and Antonio recovers nicely. Megan seems to have tightened up her leadership skills and is no longer playing nice. Victoria gives her a bit of a nuisance by working too slowly on crab cakes. Regardless, things taste great and Megan is moving her appetizers out to diners. Trenton has also taken charge of his brigade and both kitchens are firing their first entrees of the night. Kiya pledges to give it her all at the meat station despite her disdain for Trenton. Brynn serves up garnish two minutes early and Kiya is fuming after telling them she needed three minutes. Now the chicken is undercooked, but Trenton’s team recovers quickly. Over in Megan’s kitchen, Josie is overcooking the meat and has little response as Megan screams at her.

9:50 p.m. — Josie fails to redeem herself when she delivers a raw ribeye. Megan pulls Josie from the meat station and replaces her with Steve. He does Megan proud and her team is sending out entrées to happy diners. Kiya continues to struggle at Trenton’s meat station and is slowing up the team. Trenton pulls the team into the pantry and screams at them, “Why are you trying to f*** me over?” Kiya is annoyed and says Trenton is trying to act like Gordon with his wild mood swings. Both kitchens get back on track and finish up dinner service. Gordon says the service was a little rough, but he’s ready to announce the winner of Season 20 right now. The winner is…under 25 years old! Once again he has played a cruel joke on the finalists. After reviewing the comment cards from the diners, Gordon will decide who is the most deserving young gun.

9:59 p.m. — Gordon reflects on the progress Megan and Trenton have made throughout this season. He pulls the finalists into his office and once again praises their strengths and cooking abilities. A decision has been made. Megan and Trenton both stand in front of their doors, but only one will open to a confetti-filled celebration. The winner of Season 20 of “Hell’s Kitchen” is Trenton! He will become Gordon’s protégé as well as the head chef at Gordon Ramsay Steak 2.0. Trenton is also the first male winner of “Hell’s Kitchen” since Season 12’s Scott Commings. To top things off, Trenton proposes to his girlfriend Macee. What a celebration! That’s a wrap for Season 20.