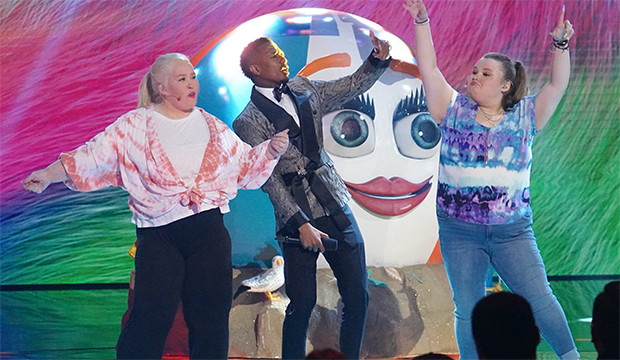 The Group B performers from “The Masked Singer” were feeling grateful on Wednesday night’s “Giving Thanks” episode, but after making their wildcard debut, Beach Ball was immediately bounced from the competition. The two-faced toy tried to get the party started with a performance of “Party in the USA” by Miley Cyrus, but the off-key duet led them straight to an unmasking ceremony. Reality TV superstars Honey Boo Boo and Mama June were revealed to be the secret celebrity singers inside Beach Ball.

“It was definitely very hot,” Honey Boo Boo admitted during their unmasked interview with host Nick Cannon. “We had to move the mouth, make sure we don’t roll off the stage. It was a lot!” When asked who was singing in the front and who was in the back, Honey Boo Boo quickly pointed to her mother and said, “She was in the back of the ball. You know I gotta be the star of the show!”

For Mama June, the performance was an emotional reconnection with her daughter. “I was in my addiction,” she admitted. “I was away from my kids for two years. Now I’m fixin’ to celebrate two years clean. This is the first project outside of our show that we’ve done together. It feels kind of nice. I cried, that’s why I missed the first line. I always do whenever she performs.”

Beach Ball was the third performer eliminated from Group B and the eighth overall. Honey Boo Boo and Mama June’s exit was preceded by Dwight Howard as Octopus, Vivica A. Fox as Mother Nature, Toni Braxton as Pufferfish, Tyga as Dalmation, Larry the Cable Guy as Baby, Ruth Pointer as Cupcake and Rob Schneider as Hamster. The contestants advancing from Group B are Banana Split, Caterpillar, Mallard and Queen of Hearts. The final four Group A performers will compete in the semifinals on November 10 with all new performances from Bull, Jester, Pepper and Skunk. “Alter Ego” judge will.i.am will be the guest panelist.