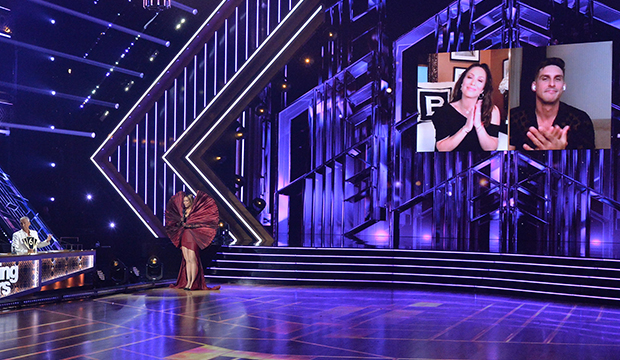 Cody Rigsby and Cheryl Burke survived the first elimination of “Dancing with the Stars” Season 30, and the show must go on next week as the pro continues to recuperate from COVID-19. But how?

Burke, who tested positive for a breakthrough case of COVID-19 on Sunday, must quarantine for 10 days, meaning not only will she miss the Oct. 4 episode of “Dancing” as well but she can’t train with Rigsby in person this week. Instead, she will choreograph their third routine from home and teach him via Zoom while the Peloton instructor rehearses with a substitute pro, the pair revealed in a press conference Monday night after the show. “I’m going to be the ultimate dance mom right over here,” Burke joked to Page Six. “I’m really good at it for some reason.”

During a break from “Dancing” in 2017, Burke replaced Abby Lee Miller on “Dance Moms,” which also featured another Season 30 contestant, JoJo Siwa. “I’m going to have to call up JoJo Siwa and see how she dealt with it,” Rigsby cracked.

Burke revealed her positive test in an tearful video Sunday night, telling fans that she felt like she let Rigsby down. On Monday’s show, host Tyra Banks announced that they were still in the competition — though Rigsby was not in the studio since he was a close contact of Burke’s — and would be judged based on taped rehearsal footage, which was recorded prior to the pro’s positive test. Their salsa earned a 24 out of 40, bringing their two-week total to 48. Both Zoomed into the show to receive their scores and for the elimination results.

Burke said “everyone’s been so sweet” since her diagnosis and she’s feeling better as many of her symptoms have subsided. “I feel weirdly normal except maybe a tiny headache, but that could be because of my tight pony,” she shared. “I feel great though. Yesterday was pretty bad. I was super congested and could not breathe out of my nose, but after a good night’s sleep, I feel normal.”