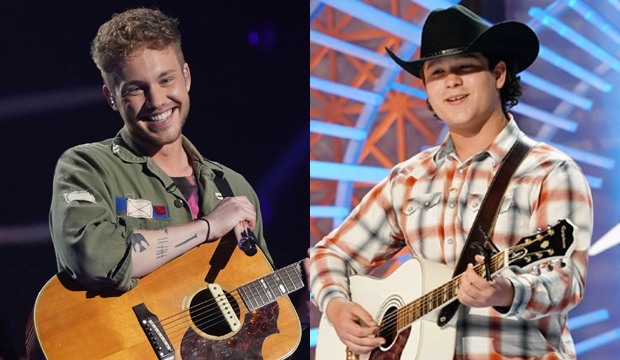 Following the shocking exit of Caleb Kennedy from “American Idol” after an old racist video resurfaced this week (read his full comment here), fans have their fingers crossed the long-running reality TV show will invite back someone who was just voted off last weekend: Hunter Metts. A whopping 83% of poll respondents said Hunter “deserves” to return now that a spot has potentially opened up, while 17% argued he “was eliminated fair and square.” What do YOU think? Sound off down in the comments section.

With Caleb officially out of the competition, only these four artists are still in the running to join the “American Idol” winners list: Casey Bishop, Chayce Beckham, Grace Kinstler and Willie Spence. The Top 4 episode will air live coast-to-coast on Sunday, May 16 on ABC, with special guest star Finneas serving as this week’s mentor.

Hunter, a 22-year-old singer-songwriter from Franklin, Tennessee, was eliminated during the Top 7 episode by America’s votes following his performances of “Everglow” (Coldplay song) and “The River” (Mother’s Day song). Being on “American Idol” was something he’d wanted to do for years, but he wasn’t allowed to since his sister had a conflict of interest as she worked at ABC’s parent company, Disney. As Hunter revealed at his audition, his sister quit her job so that he could apply, and it all worked out in the end.

The curly-haired heartthrob received a golden ticket to Hollywood following his audition song of “All the Pretty Girls,” then later took on the following tunes: “July” (showstopper round), “Chandelier” (Top 24 solo), “Who Will Save Your Soul” (Top 24 duet with Jewel), “Skinny Love” (Top 16 week),”I Can’t Make You Love Me” (Top 12 live reveal), “Falling Slowly” (Oscar week) and “You’ll Be in My Heart” (Disney week).

Hunter has been receiving lots of love on social media ever since his elimination. Here’s what some fans are saying about him in the wake of Caleb’s controversial ouster:

Mary Hawkins: “Hunter Metts should be brought back.”

Diane: “Yes they should bring him back.”

Grace Almacen: “Yes, Hunter Metts should be brought back to ‘American Idol’! I was frustrated when he was eliminated last week. But you can see that he was still smiling even though he got one of the lowest votes in last week’s elimination.”