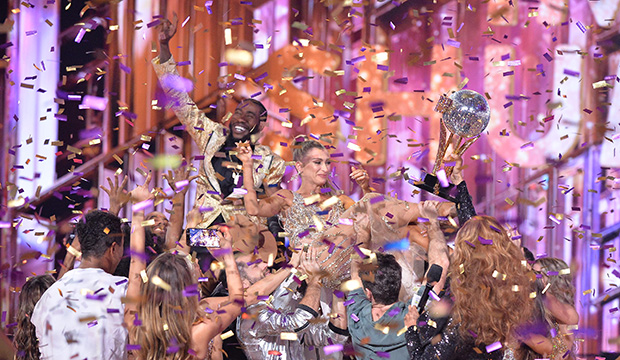 “Dancing with the Stars” crowned new champions on Monday night as Iman Shumpert and Daniella Karagach won Season 30, but their victory certainly felt like old times. Like we said before the finale, the NBA champ exemplifies what the show is really about (and used to be?): someone with no dance experience who worked hard, improved and was enjoying themselves and their partnership. It was also a win that no one saw coming two months ago.

To be fair, no one involved in the show or fans for that matter can predict which celebrity or couple will flourish or bomb or click with or alienate the audience. You might have an idea, but no really knows until it happens. Sure, the season-long favorite has won it all before — and runners-up JoJo Siwa and Jenna Johnson would’ve been deserving, groundbreaking winners — but sometimes someone manages you to surprise you in the best way, which is the case with Shumpert, who’s now the first person to get his hands on the Larry O’Brien trophy and the Mirrorball trophy.

Think back to when the cast was announced in September. Many clocked him as an early boot — our odds had him in 14th out of 15 places to win and second most likely to get eliminated in the first two weeks — and you can’t really blame them. Basketball players have rarely excelled on the hardwood, there was a huge height difference between him and Karagach (6-foot-5 to 5-foot-7), and while he has his share of fans, Shumpert is not a superstar household name that the average “Dancing” viewer would know, like his former teammate LeBron James. It also didn’t help that Len Goodman bewilderingly gave him a 4 for his debut jive, which was only one point higher than what he gave Martin Kove for this. It was a harsh, lowball move that felt like he, too, didn’t expect Shumpert to last long.

But Shump proved everyone wrong. He kept at it, had a great attitude and was blessed to be partnered with a dance assassin. Karagach, who took another underdog, Nelly, last season all the way to third place in her debut season with a partner, continually killed it (#sorrynotsorry) with her inventive choreography and knew exactly how to harness Shumpert’s strengths (those lifts!) while teaching him how to dance. Again, like we said, she turned a disadvantage — his height — into a secret weapon.

Their breakthrough routine was obviously their “Us”-inspired contemporary on Horror Night, an all-timer that instantly went viral and earned them a perfect score, just the second couple of the season to get one. It was the first moment you felt like, “Holy sh–, they might actually be able to win this.” It was a hypnotic, daredevil routine that pulled viewers in — did you hear the cheers when a clip of it was played in the montage while Melanie C performed “2 Become 1” on Monday? — and they never let them go after that but rather won over more fans (reminder that they never hit the bottom two or three). Shumpert and Karagach’s scorching numbers became must-see TV, but more importantly, they radiated fun and joy, and there was an authenticity to their partnership. The fact of the matter is, most people who watch this show know squat about ballroom dancing and do not care at all about technique or if someone violated a lift (sorry to Carrie Ann Inaba). They just want to be entertained by a great, exciting and memorable dance, and Shumpert and Karagach provided that while also showcasing his tremendous growth as a dancer. They were box office.

That’s the stuff that fans have gravitated towards since the beginning of the show. Look back at some of the early winners and you’ll find several who may not have technically been the best dancer of their season, but they had the right combo of growth, personality, unforgettable routines and audience connection, like when Helio Castroneves won Season 5 over Mel B. Perhaps it was fitting that Julianne Hough filled in for her COVID-stricken brother Derek Hough at the judges’ table Monday night. And no disrespect to anyone, but Shumpert and Karagach brought back a spark that had been sort of missing from the show the past few seasons. Season 27 was obviously rough for “Dancing,” a game-changing installment that forced producers to implement the judges’ vote, and though the past two have had some incredible dancers, none were a showstopper the way Shumpert was.

Shumper’s throwback win doesn’t guarantee more of these — we have no idea what kind of cast TPTB will assemble for Season 31, let alone how anyone will do — but it’s nice to know that this late in the game, with the show past its halcyon days and fresh off a revamp, “Dancing” is still capable of producing these moments.