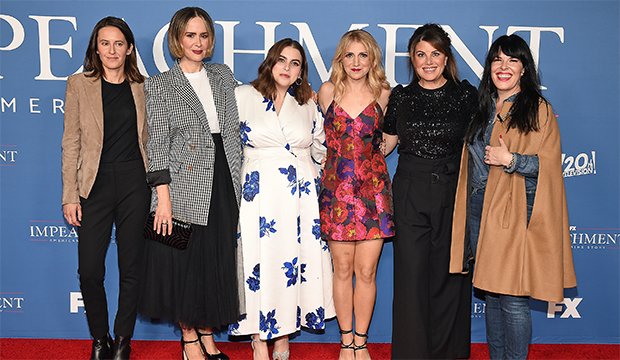 FX’s limited series “Impeachment: American Crime Story” staged a star-studded FYC event for awards voters on November 8 at the DGA Theater in Hollywood. Actors Sarah Paulson (as Linda Tripp), Beanie Feldstein (as Monica Lewinsky) and Annaleigh Ashford (as Paula Jones) were joined by producers Sarah Burgess, Monica Lewinsky and Alexis Martin Woodall on the red carpet prior to a sold-out screening of the season finale, “The Wilderness,” which airs November 9 on FX. Backstage, the actresses chatted with Gold Derby on the red carpet about their infamous real-life characters.

“[Linda Tripp] was a human being who I think made a really terrible mistake and irrevocable choice,” Paulson told us about her controversial character. During the Bill Clinton impeachment scandal in the late-1990s, Tripp recorded her conversations with her friend and co-worker, Lewinsky, and later released them to authorities. “I don’t think it renders her a worthless human being,” Paulson added. “I think she was really cast aside both by society and by the media. Some of the anger is warranted, but some of it feels like a bridge too far.”

Paulson spoke about “character assassination” comparisons between Tripp and Marcia Clarke, the person she won an Emmy for playing in “The People v. O.J. Simpson: American Crime Story.” She noted, “Linda is accused of destroying a young woman’s life. Marcia is accused of losing that trial. But I do think they’re similar in the sense that I think there is an opportunity for a deeper look at Linda and her behavior and her choices, some of which I will never agree with.” Paulson then called her co-star Feldstein a “magical person,” saying, “I worship her and if I could act with her many times again I would be so happy.”

While Paulson has worked with producer Ryan Murphy on a number of projects, “Impeachment” marks Feldstein’s first foray into Murphy’s TV universe. “It’s surreal,” Feldstein smiled. “He’s made some of the most prolific television. I grew up and I continue as an adult to just really admire everything that’s he done and he’s really changed the landscape of television and continues to. So when I got the call in June 2019, ‘Beanie, it’s Ryan Murphy,’ just that sentence I will never forget as long as I live.”

Feldstein was four years old when the Clinton/Lewinsky scandal broke, so she only knew the bare minimum about the woman she was about to play before taking on the role. “I was a toddler and so I only knew what you learned in history class or just kind of by absorption as you grow up,” she admitted. “I was kind of starting from as much of a blank slate mentality as you possibly could be. For me, I think people do not understand the 12 hours that Monica spent with the FBI. When it was talked about, it was never given any weight or any sense of responsibility or lengthy ideological discussions — none of that was happening at the time.”

Ashford didn’t know much about Jones before being cast in “Impeachment,” except for what she saw on “late-night comedy shows in the 90s and her involvement in the 2016 election cycle.” The “B Positive” star adds that what surprised her the most about Jones was “her intention for coming forward” and accuse President Clinton of exposing himself to her. “Really what she wanted first and foremost was to please her husband. I think that’s gonna surprise a lot of the viewers,” she declared.

The actress endured three-and-a-half hours in the hair and makeup chair to become Jones, which included half an hour to get the iconic nose prosethic just right. “I always felt like that was sort of the ultimate piece of Paula that needed to be there to kind of transform us,” Ashford said about the character’s nose, which becomes a plot point in the series as she undergoes surgery after being “brutally made fun of” in the media.

As the head writer on “Impeachment,” Burgess said “a lot of things” surprised her when she started researching the scandal. “I didn’t know that [Tripp] was in the White House even, so that to me suggested a whole backstory for this character that helped to understand some of why she did what she did.” Ultimately, Burgess hopes the project makes people “reconsider why they take a certain side in a story … why is it some people have more freedom to things that others don’t?”