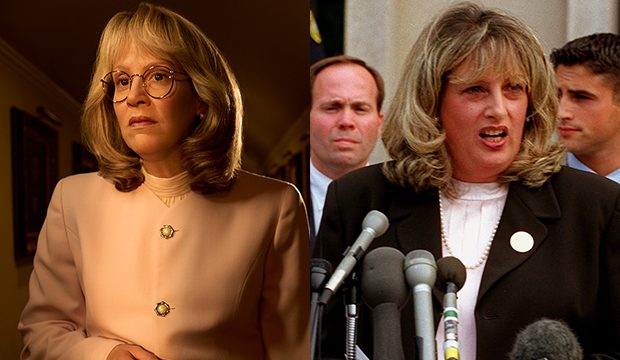 Sarah Paulson transforms like never before in “Impeachment: American Crime Story.” Playing civil servant Linda Tripp, who infamously informed on her friend Monica Lewinsky and her scandalous relationship with President Bill Clinton, Paulson is nearly unrecognizable. The actress gained weight, wore prosthetic makeup and donned a fat suit to closely resemble Tripp, which drew a variety of opinions from early watchers of “Impeachment.” But as the series progressed, Paulson quietly revealed further layers in her performance than what’s on the surface.

For the first few episodes of “Impeachment,” it might be distracting for avid TV viewers to watch Paulson in such an eye-popping role. Her large appearance, the way she carries herself and her studied vocal inflections are so noticeable that some may not have been able to appreciate the performance beyond that surface level. Yet, there is a balancing act to Paulson’s performance that becomes trickier but more impressive with each episode. Her Linda is a jaded bureaucrat, a woman teased all her life who files away her grievances for future use. It is no wonder that her burgeoning friendship with Lewinsky quickly becomes an opportunity to gain political favor.

As the season unfolds, Paulson burrows further into Tripp’s psyche as she deals with the public fallout of her bombshell revelation. Despite her best intentions, she is vilified by just about everyone, mocked on late-night shows and made into a tabloid figure, not unlike Marcia Clark, whom Paulson played in the first “American Crime Story” in 2016.

While the viewer still may not like Tripp and her deceptive ways, Paulson provides the right amount of vulnerability beneath Tripp’s tough exterior to at least have some level of empathy for her. She and the writers never lose sight of Tripp as one of the antagonists of this story, but through “Impeachment” we at least come to understand her behavior.

Moving forward into the winter awards season, it will be interesting to see if Paulson can rack up the kinds of nominations and wins she received for “The People v. O.J. Simpson.” The actress swept all the major TV awards including the Emmy, Golden Globe, SAG Award and Critics Choice Award for her performance as Clark. For those who take the time to watch Paulson’s characterization of Tripp in “Impeachment,” she may be undeniable even with stiff competition.