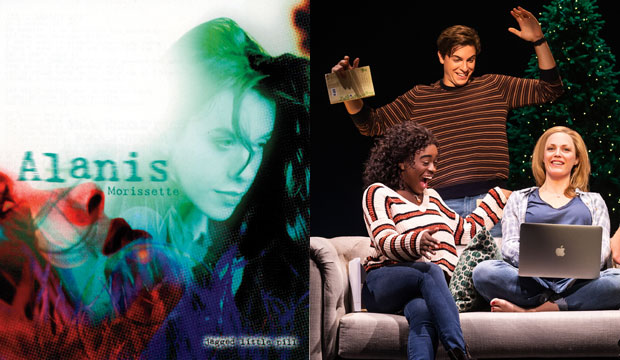 In February 1996, Alanis Morissette made history as the youngest Album of the Year winner at the Grammys at age 21 when her landmark collection “Jagged Little Pill” prevailed. She lost that particular record to Taylor Swift (“Fearless”) and then Billie Eilish (“When We All Fall Asleep, Where Do We Go?”), but the influence of the album lives on 25 years later. Now “Jagged” could win another Grammy, this time Best Musical Theater Album for the cast recording of the Broadway show it inspired.

“Jagged Little Pill” was one of the bestselling albums of the 1990s, certified 16-times platinum by the Recording Industry Association of America. So in an era when nostalgia reigns, it wasn’t too surprising when it was turned into a stage musical with a book by Oscar winner Diablo Cody (“Juno”). Though live theater was forced to shut down abruptly in early 2020 due to the COVID-19 pandemic, the production still earned a leading 15 Tony nominations including Best Musical, which may be a good sign for it at the Grammys too. The Tonys and Grammys often agree on the year’s best musical, including recent champs “Hamilton” (2016), “Dear Evan Hansen” (2018), “The Band’s Visit” (2019) and “Hadestown” (2020).

SEEBeyonce and Taylor Swift predicted to win the most Grammys, and both would make history

It doesn’t hurt if the musical has a preexisting relationship with the recording industry, like other winners in this category “American Idiot” (with music by Green Day) and “Beautiful” (featuring the songs of Carole King), though “Jagged Little Pill” would be the first Album of the Year winner later turned into a Best Musical Theater Album winner. That’s exactly what’s going to happen, according to the combined predictions of Gold Derby users. It gets leading odds of 71/20, though it faces a tough challenge from David Byrne‘s Broadway show “American Utopia.”

There’s a chance voters might gravitate to “Utopia” since it would mean giving a Grammy to Byrne himself; Morissette, meanwhile, wouldn’t win a Grammy for “Jagged Little Pill” since she’s not a performer or a producer on the cast recording, despite having written the songs. Byrne has only ever won one Grammy before in his illustrious career, while Morissette has a total of seven, so the academy may feel an even greater urgency to reward his achievement. Which way do you think this race will go?