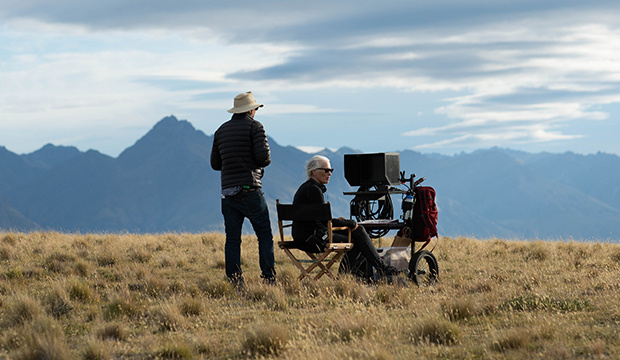 Jane Campion already has one Oscar to her name, but the writer-director is on track for more this year with “The Power of the Dog,” including for Best Adapted Screenplay. The Western, set in 1920s Montana but filmed in New Zealand during the pandemic, is based on the 1967 novel of the same name by Thomas Savage. It stars Benedict Cumberbatch and Jesse Plemons as two brothers who could not be more different in manner but whose lives are forever changed by a widow (Kirsten Dunst) and her teenage son (Kodi Smit-McPhee).

“The Power of the Dog” has received widespread acclaim since making its debut at the Venice Film Festival in early September, with many praising Campion’s work as well as Cumberbatch’s performance. As such, Oscar prognosticators have Campion as the early favorite to win for adapted screenplay — the film currently sits in first place in Gold Derby’s combined odds at 71/20, with 13 Experts predicting it to top the competition. Guillermo del Toro’s “Nightmare Alley” is currently the next closest film, with 11/2 odds and two Experts predicting a triumph. Rounding out the rest of the top five are Joel Coen’s “The Tragedy of Macbeth” (6/1 odds), which is anchored by a stellar performance from Denzel Washington, the Siân Heder-penned “CODA” (8/1 odds), and Roberto Bentivegna and Becky Johnston‘s “House of Gucci” script (19/2 odds).

Campion, who had not written or directed a feature since 2009’s “Bright Star” — she created the critically beloved miniseries “Top of the Lake” and its somewhat less beloved sequel “Top of the Lake: China Girl” in the meantime — is just one of seven women to have received an Academy Award nomination for directing; she was nominated for helming 1993’s “The Piano.” But if she nabs the award for adapted screenplay for “The Power of the Dog,” she’ll become the first woman in history to take home both the Academy Awards for Best Original Screenplay and Best Adapted Screenplay, as she won the former for writing “The Piano” as well.

Only 13 others have completed the impressive feat thus far. They are Robert Benton, Charles Brackett, Paddy Chayefsky, Francis Ford Coppola, Horton Foote, Bo Goldman, William Goldman, Ring Lardner Jr., Alan Jay Lerner, Waldo Salt, Billy Wilder, and Joel and Ethan Coen, the final two winning together for their films “Fargo” (1996) and “No Country for Old Men” (2007). Aaron Sorkin, who previously won for “The Social Network” (2010), had a chance to join the exclusive club in April with “The Trial of the Chicago 7” (2020), but he lost Best Original Screenplay to Emerald Fennell, who penned “Promising Young Woman.”

“The Power of the Dog” will have a limited theatrical release on Nov. 17 before arriving on Netflix on Dec. 1.