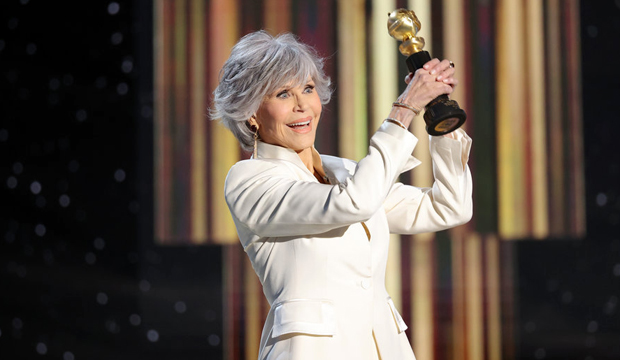 The 78th annual Golden Globe Awards has concluded and is finally in the history books. The ceremony, which had all of the honorees accepting via video conferencing, got off to a rocky start with the audio issues that Daniel Kaluuya experienced when he won Best Film Supporting Actor. But as the evening went on, we managed to get some great speeches. Some served as a galvanizing call to action like this year’s recipient of the DeMille Award, Jane Fonda. Others were incredibly moving such as Simone Ledward Boseman accepting Best Film Drama Actor on behalf of her late husband, Chadwick Boseman. Then there were those that were just sweet and nice to watch like Best TV Drama Actor winner, Josh O’Connor.

Below, we’ve listed our picks for the night’s best speeches. But, we also want to know which one you liked the best? Vote in our Golden Globes acceptance speech poll at the bottom of this post and let us know what you think in the comments.

It can be very uncomfortable to watch someone who is white and well-off financially lament about the suffering of others, but Fonda managed to make her statement work as she accepted her lifetime achievement honor. She gave shout-outs to great works that inspired her this past year but made sure she saved her criticism of the industry for the end, when it would be most impactful. “So let’s all of us, including all the groups that decide who gets hired and what gets made and who wins awards, let’s all of us make an effort to expand that tent so that everyone rises and everyone’s story has a chance to be seen and heard.” Fonda made a statement in the way that only she could. Bravo!

We knew that this would be an emotional moment if it happened and watching Boseman’s widow, Simone Ledward Boseman, in tears as she accepted on his behalf brought all of us to tears as well. She paid tribute to her late husband, who passed away in August from colon cancer, by saying, “He would say something beautiful. Something inspiring, something that would amplify that little voice inside of all of us that tells us you can, that tells you to keep going, that calls you back to what you are meant to be doing at this moment in history.” She closed by looking up to the heavens and saying, “Hon, you keep ’em coming.”

Zhao seemed to be caught a little off guard when she was announced as the winner but she spoke eloquently and to the point by thanking her fellow nominees for “making beautiful movies” and giving thanks to the entire “Nomadland” team. In thanking the nomads that were in the movie, she read something said by Bob Wells on the subject of compassion: “Compassion is the breakdown of all the barriers between us — a heart-to-heart bonding. Your pain is my pain; it’s mingled and shared between us.” Zhao followed that by saying, “This is why I fell in love with making movies and telling stories.” She later won again for Best Film Drama.

Levy got right to the point as he started his speech by thanking the cast and crew for the amazing journey that they have been through for the past six years. He then gave huge thanks to CBC for giving the show enough time to find its voice and its audience. He brought it back to the recurring theme of inclusion that the show has championed and closed by adding, “In the spirit of inclusion, I hope that this time next year this ceremony reflects the true breadth and diversity of the film and television being made today because there is so much more to be celebrated.”

Corrin’s co-star and competitor, Olivia Colman, almost stole the show with her dance in celebration of Corrin’s win. But she quickly regrouped and her laughter was infectious as she thanked Josh O’Connor (who would later win the lead actor category) as she referred to him as her “Prince Charming.” She then finished it by paying tribute to the person she portrayed, Princess Diana, by saying, “You have taught me compassion and empathy beyond any measure that I could ever imagine. On behalf of everyone who remembers you so fondly and passionately in our hearts, thank you.”

Like his on-screen wife, O’Connor was very surprised by the win but quickly pulled himself together. He thanked everyone on “The Crown” and said of the cast that working with them was a “master class.” In thanking Corrin, he called her a “brilliant player of rock-paper-scissors. I love you to bits.” He saluted his fellow nominees: “You’re all my heroes!” He closed with a moving statement about how the pandemic has affected people’s emotional well-being. “I just want to say I am very lucky to work in this period and there’s so many people who are unable to work and are alone and isolated. And I hope we can all collectively put mental health at the forefronts of our minds.”