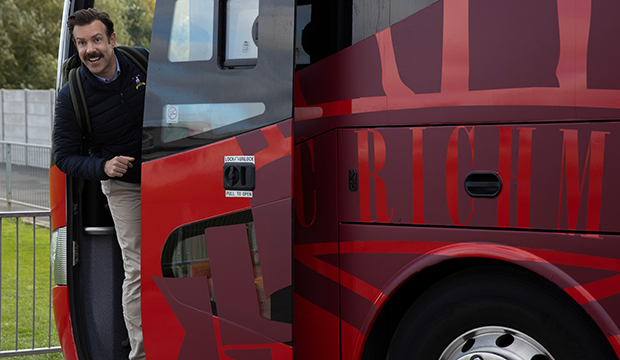 It might be time to find the broom because a possible sweep is on the horizon. Jason Sudeikis, star and co-creator of Apple TV+’s “Ted Lasso,” is on track to win all five major TV acting awards for one season for his portrayal of the show’s leading man, a relentlessly positive American football coach who takes over as manager of a failing Premier League soccer team. Should the former “Saturday Night Live” star succeed in sweeping the awards for the show’s first season, he will become just the fifth person in history to complete the difficult feat, and he’ll be the first man to do it.

Sarah Paulson first completed the sweep by winning the Television Critics Association, Emmy, Golden Globe, Critics Choice and Screen Actors Guild Awards during the 2016-17 season for her turn as Marcia Clark on FX’s limited series “The People v. O.J. Simpson: American Crime Story.” Michelle Williams and Phoebe Waller-Bridge became the second and third performers to do it when they took home all five awards for their respective performances on the FX limited series “Fosse/Verdon” and the Amazon comedy “Fleabag” in 2019-20. Finally, Catherine O’Hara completed the sweep this past year for her unforgettable performance as Moira Rose in the final season of Canadian comedy “Schitt’s Creek.”

Sudeikis’ path is going to be a bit more difficult than O’Hara’s was last year. While the legendary comedy actress started her campaign by winning the TCA Award and Emmy, just like Paulson, Williams and Waller-Bridge did, “Ted Lasso” was not eligible for either last year because it debuted in August. So Sudeikis’ path toward the record books actually began earlier this year, when he won the Golden Globe, Critics Choice and SAG Awards in quick succession. This means Sudeikis would be the first to sweep by collecting the winter awards first and the Emmy last, but he has fierce competition for the TCA Award, which is not separated by gender.

He’s nominated for Individual Achievement in Comedy alongside his “Ted Lasso” co-star Hannah Waddingham, who portrays Richmond team owner Rebecca Welton. Also nominated are Bo Burnham (“Bo Burnham: Inside”), Kaley Cuoco (“The Flight Attendant”), Maya Erskine (“PEN15”), Renee Elise Goldsberry (“Girls5Eva”), Charlotte Nicdao (“Mythic Quest”) and Jean Smart (“Hacks”). While Sudeikis’ nice guy performance has made lasting impressions on both viewers and voters, it’s possible that he and Waddingham could split the “Ted Lasso” vote. If that happens, it could open the door for someone like Smart, who is in the midst of an incredible career resurgence and whose performance as Deborah Vance on the HBO Max comedy was beloved by critics, or Burnham, whose surprise Netflix special had everyone swooning, to easily run away with the award.

The journey to taking home the Emmy for Best Comedy Actor looks to be easier for Sudeikis, who is nominated alongside perennial Emmy nominee Anthony Anderson of “Black-ish,” Kenan Thompson of freshman comedy “Kenan,” William H. Macy, who snuck back into the race for the final season of Showtime’s black comedy “Shameless” and Michael Douglas of “The Kominsky Method.” This was a pretty wide open field after the conclusion of “Schitt’s Creek” last year, and Sudeikis clearly has all the momentum heading into the Emmys, especially since Season 2 of “Ted Lasso” is now airing, thus putting both the series and Sudeikis front and center of voters’ minds.

Completing the sweep of all five major acting awards for one season is obviously something to be celebrated, but in addition to potentially being the first man to manage it, the type and timing of Sudeikis’ sweep would also stand out from those who came before him. Both Paulson and Williams swept while starring in limited series, which meant it was their first and only opportunity to win for their respective performances. Although Waller-Bridge and O’Hara prevailed for roles on regular series, they won during their final year of eligibility, which meant it was voters’ last chance to recognize them. Sudeikis does not fall into either of these scenarios; “Ted Lasso” is an ongoing series that has already been renewed through Season 3. This means he has at least two more chances to be recognized. If he can pull this off for “Ted Lasso’s” first season, it will not only be impressive, but it will be a first in more ways than one.