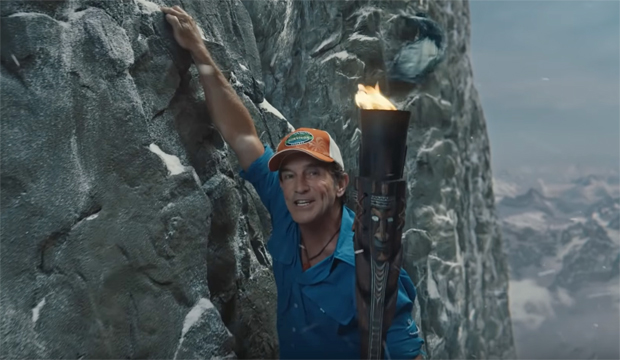 Midway through CBS’s broadcast of Super Bowl LV, “Survivor” fans’ mouths shot open in shock when they saw Jeff Probst in a commercial for Paramount Plus (watch below). Was this a tease about the long-awaited Season 41? Was a filming date about to be announced? Alas, Probst was simply doing his part in promoting the rebranding of the CBS All Access streaming service owned by ViacomCBS. The switch to Paramount+ officially happens on March 4, 2021.

The streaming service currently has an all-time high of around eight million subscribers, but that number should skyrocket in the wake of all of the high-quality Super Bowl ads. Besides Probst, other A-list celebs who took part in the fun campaign included Patrick Stewart (“Picard”), Sonequa Martin-Green (“Star Trek: Discovery”), Simone Missick (“All Rise”), Thomas Lennon (“Reno 911”) and Trevor Noah (“The Daily Show”).

“Will we survive this mountain?” Probst asked the football audience while dangling from the snowy cliff and holding his trademark torch. “Find out what’s next. That’s right, it’s a literal cliffhanger.” Of note, all 40 seasons of “Survivor” will continue airing on Paramount+, just as they did on CBS All Access.

So where do we stand on the 41st season of “Survivor”? Remember, this was originally supposed to film during Summer 2020 and air in Fall 2020, but because of the coronavirus pandemic it was delayed indefinitely. As of this writing, production has been pushed back to Spring 2021 because Fiji’s borders remain closed due to Covid-19. CBS’s new goal is to film the next two installments back-to-back. If this happens, you can expect to see the episodes air on television in Fall 2021 (for Season 41) and Spring 2022 (for Season 42). Stay tuned.

One thing we know for sure is that “Survivor’s” host with the most Probst will return as host/showrunner of Season 41. Why wouldn’t he? The 59-year-old has appeared in all 596 episodes so far, winning four Emmy Awards for his hosting abilities (2008-2011).