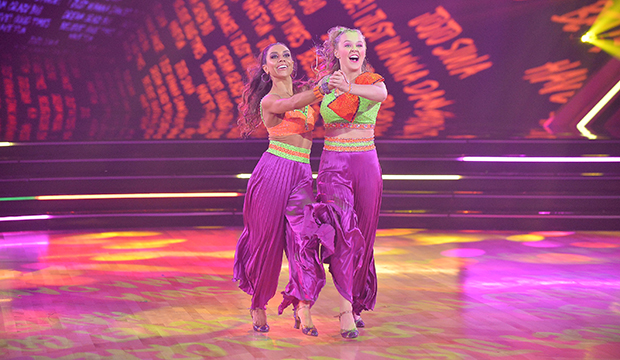 Jenna Johnson required more than ice after slipping during her and JoJo Siwa‘s historic “Dancing with the Stars” debut on Monday’s Season 30 premiere. The pro injured her right knee in the mishap and had to take Tuesday off from rehearsals.

“I should have known that there was going to be a flaw in the system, but no one had ever done this before, so we didn’t know that with two girls and long dresses, long skirts, that potentially one of us would slip. I slipped on JoJo’s dress while we were doing the quickstep. Both my feet actually came out from under me,” Johnson recalled to Page Six. “While I was in that process of trying to squeeze and not fall — thankfully she held me up — my knee kind of tweaked, kind of slipped out of place, came back in. … Very unfortunate, but now we know we should make sure our skirts aren’t as long before our next ballroom standard dance so this doesn’t happen again.”

In a series of Instagram Stories following the show on Monday, Johnson filmed herself getting treatment on her knee. “They made me take a day off to just rest. So, icing the knee, but I feel fine,” she told Page Six. “I did some therapy last night.”

While she physically feels OK — she posted Instagram Stories from rehearsal Wednesday — the Season 26 champ is “disappointed” that the blunder shifted focus away from Siwa making “Dancing” history as part of the show’s first same-sex couple. The duo also earned the highest score of the night despite the flub, a 29 out of 40. “Obviously, I’m so disappointed because I feel like I took away from JoJo’s moment because this was such an epic night for us, for ‘Dancing with the Stars,’ for her,” Johnson lamented. “I think that she did get to have her moment. I think that even with the stupid little slip-up, she did incredible.”

Though Johnson had to take the day off, Siwa practiced their Week 2 dance at home on Tuesday and FaceTimed with Johnson twice, once about the routine and another to check in on her. “She is the sweetest human in the world,” Johnson said. “Just, like, star student, already practicing at home.”