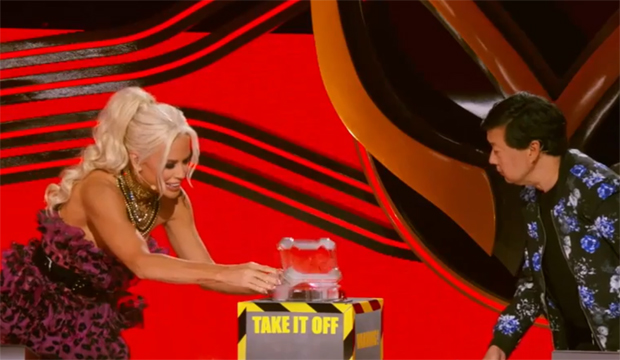 Just one week after Ken Jeong wasted the Take It Off buzzer on “The Masked Singer,” Jenny McCarthy followed in his unfortunate footsteps. “I’m so ashamed!” she exclaimed after she found out that her guess of Jake Gyllenhaal for the Caterpillar was dead wrong. As per the show’s rules, if a panelist presses the red button and their guess turns out to be incorrect, they will be “significantly punished.” Jenny’s punishment for the fiasco, explained host Nick Cannon, was to be Ken Jeong‘s personal housekeeper.

“She was so confident though, wasn’t she? ” Nick said with a laugh as Jenny screamed in anguish over her terrible guess. “Well, Jenny, because you got it wrong, you’re gonna have the worst punishment of your life. You have to clean Ken’s dressing room.”

As Jenny reacted in horror, Ken proclaimed, “No! I wouldn’t wish that on anybody.” A quick shot of his dressing room revealed it to be covered in Skittles, take-out food boxes, dirty clothes and a photograph of Joel McHale.

Nick then explained that the Take It Off buzzer is officially retired for the season. The panelists could only use it once per group, with Ken pressing it for Group A’s Pepper and Jenny pushing it for Group B’s Caterpillar. Since both of their guesses were wrong, the buzzer had no effect in Season 6. If either of them had been correct, they would have gotten two points toward the Golden Ear trophy instead of just one.

The November 17 episode featured Caterpillar, Banana Split, Queen of Hearts and Mallard competing in the Group B semi-finals. At the end of the episode, Mallard unmasked as Willie Robertson (“Duck Dynasty”) and Caterpillar unmasked as Bobby Berk (“Queer Eye”). Survivors Banana Split and Queen of Hearts will next compete in the Group B finals, with only one advancing to the season finale where they will face off against the Group A champion for the Golden Mask trophy.