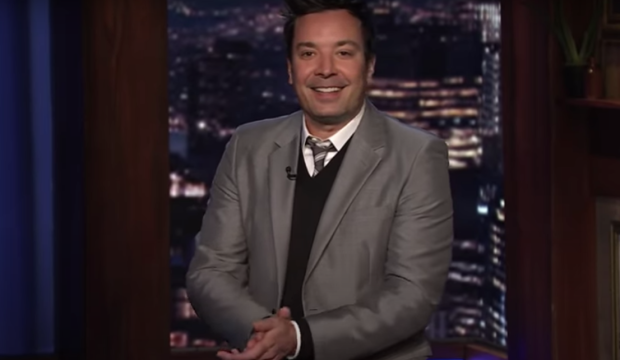 Senator Ted Cruz is such a target for late-night jokes right now that even Jimmy Fallon spent a few minutes at the top of Monday’s “Tonight Show” dunking on him. After last week’s “escape from Houston” debacle where Cruz and his family fled their storm-ravaged state for a vacation in Mexico, the Republican lawmaker tried to do damage control by giving out bottled water to his constituents – and posting photos on social media of his charitable work. His transparent attempt to save face didn’t help him.

“People were upset when they realized Cruz was loading water into his car,” Fallon joked.

“‘Gotta use this to refill my water bed,’” the host added, imagining how Cruz might use the supplies.

“Yeah, it seemed like an OK gesture until everyone noticed the label on the bottle said ‘Ritz Carlton Cancún,’” Fallon cracked. “Actually, Cruz wanted to do more, but he had a parasailing lesson at 3.”

Fallon noted that people were mad that Cruz shared the photos himself. “Even white people who only posted black squares on Instagram were like, ‘You gotta do more than that,’” Fallon said, a reference to last summer’s uproar over Blackout Tuesday.

It was too little, too late from the senator, but Fallon joked that Cruz tried to be helpful in a different way. “Later, he showed Texans how to make frozen margs with the snow in their living rooms.”

This year has been rough for Cruz so far, Fallon said. First, he supported former President Donald Trump’s attempts to subvert democracy, which resulted in a riot at the Capitol, and now this. “Things are so bad for Cruz, he spent today thinking about the good old days, when people just thought he was the Zodiac Killer,” Fallon said.