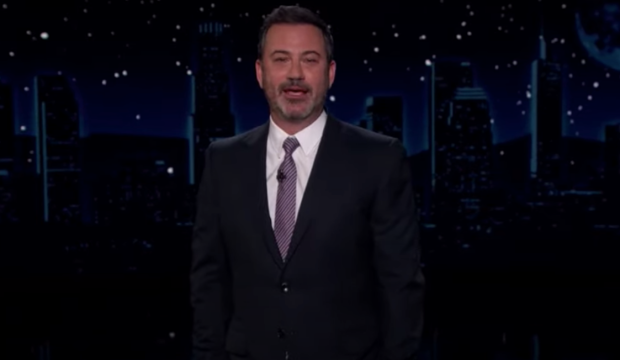 Screengrab via ABC.
New York Governor Andrew Cuomo’s empire is collapsing due to allegations of sexual misconduct, and President Joe Biden had not commented on the claims until this week when he told ABC News that Cuomo should resign if an investigation confirms he sexually harassed subordinates. Before Biden made his comments, Donald Trump Jr. went on Fox News to complain about Biden and Cuomo, and Jimmy Kimmel found this to be very rich because Cuomo “is getting close to breaking Presidaddy’s all-time sexual misconduct record by an American politician,” the host said on Tuesday’s “Jimmy Kimmel Live.” (Donald Trump has been accused of sexual misconduct by 26 women, claims he has denied; Biden was also accused of sexual misconduct, a claim he also denied.)

Kimmel rolled a clip of DJTJ moaning about Biden speaking out against Republicans accused of misconduct but not Democrats, and saying that Biden isn’t the best person to speak on it anyway, “given his history of sniffing children, et cetera.”

“We wanna know what you are sniffing, that’s what we would like to know,” Kimmel cracked. “If I was you Donny, I’d stuff the word ‘sniffing’ back into the family thesaurus.”

Then “the fraudigal son,” as Kimmel deemed him, gave his review of Biden’s first two months in office: “I think it’s probably the most disastrous 60 days in the history of American politics, and certainly the presidency.”