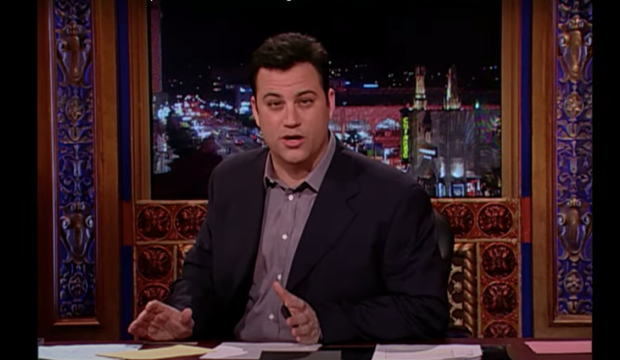 To acknowledge the milestone, Kimmel decided to dig up the first joke about former President Donald Trump he ever told on the show. “Yes, it is about his hair,” Kimmel said to set it up.

The clip that rolled was from January 13, 2004, five days after The Apprentice premiered. Bush-era Kimmel, looking like a completely different person than the graybeard he is now, said, “You know, they say it’s going to be the coldest week in two decades on the East Coast this week. It’s supposed to be minus-8 over the next couple days. It’s so cold in New York, Donald Trump’s combover broke off.” Rimshot!

“We rehearsed that all day,” Kimmel joked. An inauspicious start, but hey. “It was a simpler time,” present-day Kimmel said.

In keeping with the political theme, Kimmel also shared the first joke he told about current President Joe Biden on the show, from August 27, 2008, shortly after then-candidate Barack Obama picked Biden as his running mate. “I have to say, after all the name-related problems this campaign has had, why Obama would pick a vice president with the last name ‘Biden’ is beyond me,” Kimmel said. “It’s like they’re trying to make their ticket sound as much like ‘Osama bin Laden’ as possible. They found the two guys in America whose names matched up most closely with the person we hate more than anyone in the world and they put them on the bumper sticker.” Again, an inauspicious start.

Kimmel closed the retrospective segment of his monologue by thanking all the people who made the show possible over all these years: “Snooki, Charlie Sheen, Honey Boo-Boo, the Kardashians, and of course, former president Golfy McNuggets.”

Jason Sudeikis is the best 'SNL' Joe Biden, according to you [POLL RESULTS]