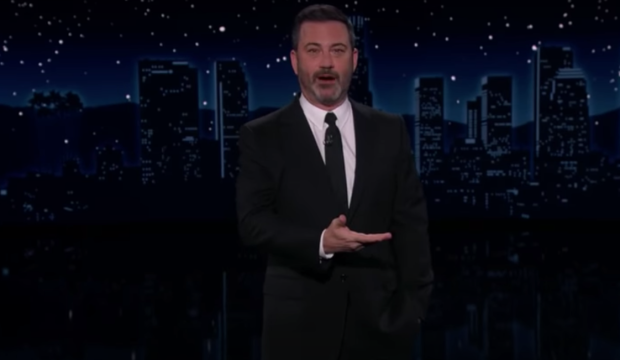 On Monday’s “Jimmy Kimmel Live,” the host’s thoughts were in outer space. “The truth is not just out there anymore – it’s here,” Kimmel said.

Kimmel was talking about a report on “60 Minutes” on Sunday where some “very credible” former Pentagon and Navy officials described seeing UFOs that traveled unbelievably fast through the sky. They even had video of some of them. The government calls them “Unidentified Aerial Phenomena,” or “UAP.”

“They’ve known about this for a couple of years but waited until now to talk about it because – I guess a couple of years ago, they would have been too embarrassed if the aliens said, ‘take us to your leader,’” Kimmel said. They would be like, ‘Eh, not a great idea.’”

Kimmel was shocked that no one in his studio had watched the report. “I feel like if this story had been on ‘60 Minutes’ in like 1988 it would be the only thing we talk about for the next 30 years. It would have been the biggest news story of the year,” he said. “Now it’s like ‘Yeah, I heard that – and I also heard Bill Gates was trying to get freaky with some of his employees, right?”

Kimmel hopes they’re actually aliens. “After watching the story, and you should if you haven’t, you almost hope they’re visitors from another planet, because if China has technology like this, we’d better learn to speak Mandarin like immediately,” he said.

He has so many questions about our visitors from space. “I want to know where they come from, what kind of engines or fuel propels these things, what information – what is this information they’ve been trying to find in hillbillys’ butts for all of these years? That’s what I want to know,” he said.

If Kimmel really wants to know what’s up with aliens, he’ll have to get in touch with the guy from blink-182. He’s the one doing the research.