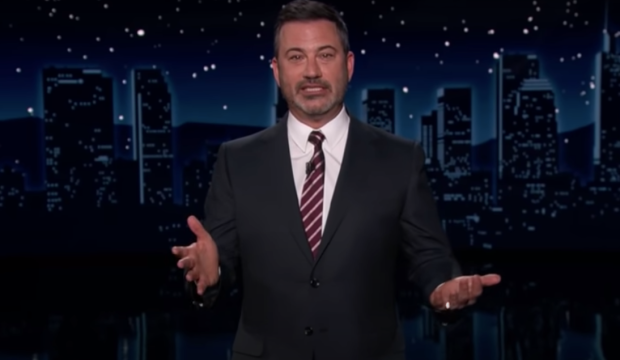 Matt Gaetz, the Florida congressman who has long been one of Donald Trump’s staunchest, most aggressive supporters and “basically the shrimp tail in your Cinnamon Toast Crunch,” according to Jimmy Kimmel, is in some hot water. On Tuesday the New York Times reported that Gaetz is under investigation by the Justice Department for possibly paying for a 17-year-old girl’s travel across state lines while having a sexual relationship with her, which would be sex trafficking. Gaetz has denied any wrongdoing, and said the investigation is part of a plot to extort him and his family.

On Wednesday’s “Jimmy Kimmel Live,” the host pointed to part of Gaetz’s voting record that looks even more disturbing in light of the investigation. The representative from the Florida Panhandle “was the only Congressman – Democrat or Republican – to vote against a law that gave the government more power to fight human trafficking,” Kimmel said. (“Voters in Northwest Florida did not send me to Washington to go and create more federal government,” Gaetz said at the time.)

“He’s one of the worst of the worst. Even his fellow Republicans are reportedly celebrating this,” Kimmel continued. “But not only does Gaetz deny the charges, he tried to explain to Tucker Carlson last night that the real victim is him.”

Kimmel then rolled a clip of Gaetz talking to the Fox News host, where Gaetz laid out his claims that a former DOJ official is allegedly trying to extort him and his father with bogus claims. “You ever notice, it’s always ‘my father’ with these guys?” Kimmel interjected. “‘My father.’ My father was investigated because when you’d pull his finger, a fart would come out. They called it domestic terrorism.”

During the interview, Gaetz kept bringing up things he thought would try to link him to Carlson — including an instance when Carlson was falsely accused of sexual assault and also a dinner Gaetz attended with Carlson, Carlson’s wife, and a female companion. But Carlson dodged him, politely saying that his accusation situation was very different – the DOJ was not involved – and that he didn’t remember Gaetz’s friend. It made Kimmel laugh pretty hard.

“Gaetz went on to say he suspects he’s being targeted because his dad is rich and he’s a prominent Republican,” Kimmel said. “He even named the former DOJ official he said is targeting him. But this isn’t a partisan investigation. In fact, it was opened by Trump’s Attorney General, Bill Barr, who reportedly didn’t want to be seen with Matt Gaetz in public. According to Politico, Barr was supposed to do a meet and greet with Republicans on the House Judiciary Committee, but canceled when he found out that Gaetz was going to be there.”

“So, this explanation – and his behavior – flustered even his dinner pal Tucker, who did a little post-mortem for the folks watching at home,” Kimmel added, cutting to a brief clip of Carlson saying, “You just saw our Matt Gaetz interview. That was one of the weirdest interviews I’ve ever conducted.”

“This is a man who interviewed someone who claims Hillary Clinton was running a Satanic pedophile operation out of a pizza place, so…There’s always a twist,” Kimmel concluded.