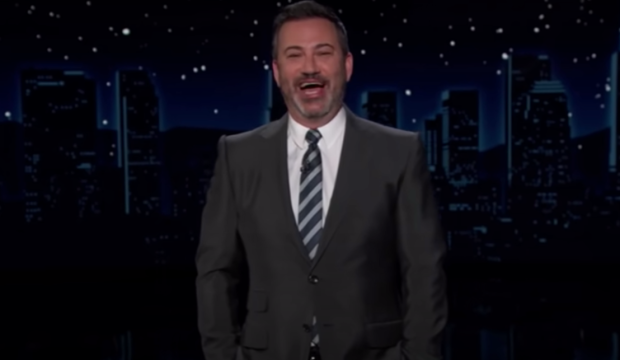 Queen Elizabeth, ya burnt. Jimmy Kimmel devoted much of his opening monologue on Monday night’s “Jimmy Kimmel Live” to Prince Harry and Meghan Markle’s bombshell interview with Oprah Winfrey, where the royal defectors revealed the scandalous reasons why they stepped down from their duties as members of the British royal family. The interview “will surely go down in history as the most shocking gender-reveal party of all time,” Kimmel cracked.

Meghan said that when she joined the royal family, the palace took her passport, driver’s license, and keys, essentially removing the actress-turned-princess’ own agency over her life. And while Prince Harry had some accusations of his own, “The governor of New York, Andrew Cuomo, vigorously denied all of them,” Kimmel joked.

Meghan said that the alleged mistreatment got so bad that she went to Buckingham Palace’s human resources department, and they flat-out refused to help her. “It’s funny that the Royal Palace has HR and it’s just as unhelpful as HR every place else,” Kimmel said.

“They also told Oprah that they’ve been cut off financially,” Kimmel said. “Oprah was like, ‘Sorry, I already gave out all my cars. I can’t help you.’”

Perhaps the most disturbing revelation in the interview was that before Meghan and Harry’s son Archie was born, some in the royal family were openly worried about how dark the biracial child’s skin would be and talked about their concerns with his parents. When Oprah heard this, she gave a wonderfully dramatic shocked reaction. When Kimmel heard this, he couldn’t believe it either.

“Imagine, after centuries of inbreeding, all of a sudden these people are concerned about the color of a baby’s skin,” Kimmel said. “Prince Charles has the ears of a basset hound, [and] they’re worried about the skin – And by the way, they should hope that the kid looks more like Meghan than Harry. No offense, but – I mean, Harry kind of looks like the guy who played Screech. May he rest in peace.”

Kimmel felt that Meghan and Harry came across as genuine in the interview, except for one thing: they said they’d only watched some of “The Crown,” the Netflix drama about the royal family. “Nobody watches ‘some of’ ‘The Crown,’” Kimmel joked. “Once you start ‘The Crown,’ you finish ‘The Crown.’ You’re hooked!”

Harry said that racism was a big part of the couple’s decision to leave Great Britain for California. “You know things are bad at Buckingham Palace if they came to America to get away from racism,” Kimmel said. “That’s like trying to get some peace and quiet at Chuck E. Cheese.”

Kimmel concluded by talking about the speculation about the beautiful backyard where the interview was conducted. During the interview, Oprah said it was the home of a “mutual friend” of hers and the royals. Kimmel jokingly claimed it was his house. “Afterwards we went in the pool. We made s’mores in the microwave. It was great.”