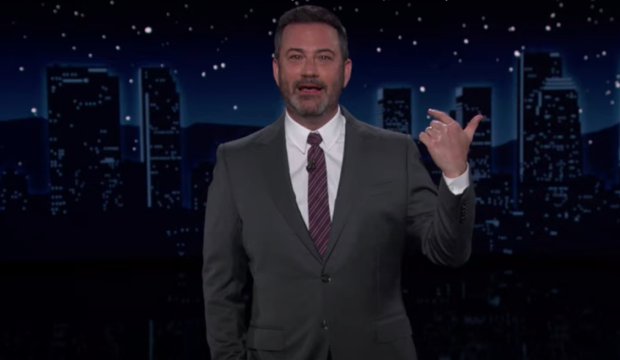 Remember Michael Flynn? He was Donald Trump’s National Security Advisor for the first 22 days of his presidency until he resigned after it came out he had lied about his dealings with the Russian ambassador. He pleaded guilty to lying to the FBI, but Trump pardoned him in the waning days of his presidency. So now he’s free to say and do whatever he wants, like appearing at what Jimmy Kimmel described as a “QAnon Con” and answering questions about overthrowing the democratically elected government.

Kimmel rolled a clip from a Q&A session at the conference of a man asking Flynn why what happened in Myanmar – a military coup – couldn’t happen in America. Flynn answered, “It should happen.”

Kimmel noted that in the Southeast Asian country, thousands of pro-democracy protesters have been imprisoned and hundreds have been killed. “And General Lie-senhower up there thinks we should do that here too,” he said.

“Although after it was suggested that he be court-martialed for that remark, Flynn tried to walk it back,” Kimmel said. “He wrote ‘Let me be VERY CLEAR – There is NO reason whatsoever for any coup in America, and do not and have not at any time called for any action of that sort.’ Except for this weekend, when you did it on video. And the times you did it leading up to January 6th. Maybe that’s the Bill Gates microchip making him say that.”

Kimmel joked that maybe there should be a coup at “Myan-Mar-A-Lago,” the Florida outpost where Trump is reportedly plotting his imminent restoration. “According to Maggie Haberman, who is a writer for the New York Times, Trump believes that he is going to be reinstated as President in August, after Arizona finishes that Cyber Ninja ‘audit’ of the election they’re doing,” Kimmel said. “Which is so completely insane and dumb it has to be true.”

“We’ll know for sure it’s true once we hear him deny it,” Kimmel said.