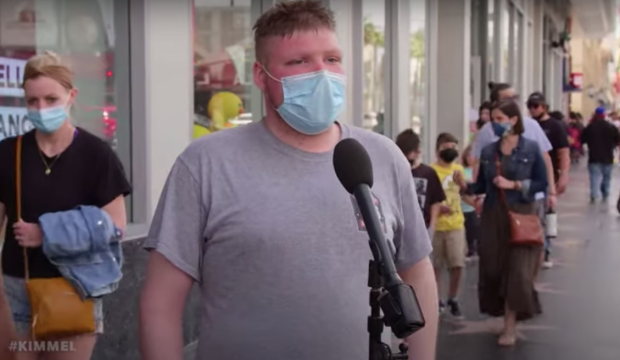 “Jimmy Kimmel Live” has a tradition, host Jimmy Kimmel said on Thursday’s show. Every year before the Academy Awards – which are happening Sunday – Kimmel sends field producers out on Hollywood Boulevard to ask people what they thought of the Oscars broadcast, even though it hasn’t happened yet. It shows how people are willing to lie for the opportunity to be on TV. The Kimmel show calls this bit “Lie Witness News,” and they did it last night.

Asked if she thought “they were able to pull off the show in the pandemic,” one woman sighed before answering, “Honestly, I think they did the best that they could with what they had and the resources that were allocated. I mean, there’s only so much that you can do with a pandemic happening, and, like, when in doubt, the show must go on, right?” Right.

Another woman was asked where she watched the Oscars, and she said on her computer with some of her friends. They did a “Zoom thing.” The producer asked if they had a betting pool going, and she said yes, but she didn’t do very well. “You win some, you lose some.” She’s a bad liar. If you’re lying, make yourself the winner! Later, she said she and her friends all logged off at the same time before Best Picture was announced.

One woman affirmed that she was surprised that Maury Pauvich won for telling Anthony Hopkins that he was the father in “The Father.”

“Yes, I grew up watching Maury Pauvich, so I thought it was kind of a little silly,” she said. “I was hoping that Anthony Hopkins would win, but it did surprise me that Maury Pauvich won.”

The producer told another woman (it was almost all women in this bit) that when Sonic the Hedgehog accepted his Best Picture award, he called for a moment of silence for all the lives lost during the pandemic. She didn’t think it had the emotional impact Sonic was trying for. “I think it’s a bit hard to get that same effect with a cartoon and an animated picture,” she said. “I think the idea was there, but I think it was difficult to come across.”

A woman named Cynthia was asked for her reaction to Glenn Close thanking Satan for her victory. “It’s not a time – there wasn’t a place for it,” Cynthia said. “People have their own beliefs, and, you know, that’s what they feel, but this venue wasn’t the place for that.” She said she’s “totally against Satan and everything that he stands for.”

One young man said he thought Jeffrey Epstein did a great job as host. “He tried to bring everyone together, he tried to forget and act like we were not wearing face masks, that we’re not going through a pandemic,” he said. He wasn’t a big fan of Epstein’s singing, though. “I’m more of like a Michael Jackson person and stuff like that,” he said.

“You like Michael Jackson more than Jeffrey Epstein?” the producer confirmed. See, that’s why you do man-on-the-street interviews, for bizarre moments like that.