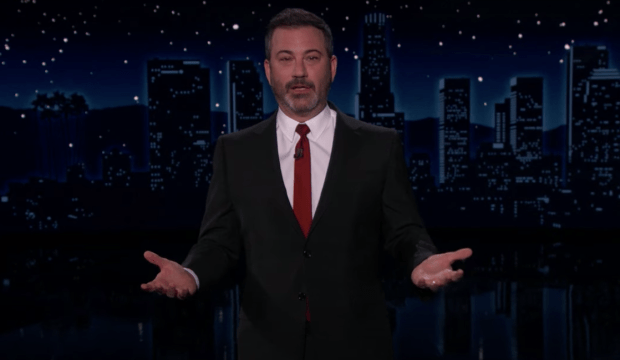 “The ratings for the Oscars plummeted from 23 million last year to less than ten million this year,” Kimmel said. “How can something so woke put so many people to sleep?”

Kimmel thought it was funny that the Academy Awards happened in a train station. “For whatever reason, the awards were held at Union Station downtown, which is the closest many of these stars have ever been to public transportation.”

It was one of the most unique and different ceremonies there’s ever been, with the change of setting and COVID-necessitated safety protocols inspiring producers to change a lot of things about the telecast. “This was the Oscars that finally answered the question – what happens when you don’t cut off acceptance speeches?” Kimmel said. “Turns out, they go on for a very long time.”

Kimmel said that there were some surprises during the show, especially in the Best Actor category. “Everyone thought that would go to the late Chadwick Boseman,” the host said. “They even saved that category for the end of the show, assuming it would be a big emotional moment to wrap it up, but instead of Chadwick Boseman, Anthony Hopkins won Best Actor for playing a man with dementia in ‘The Father.’ And he was so committed to his role he forgot to show up for the Oscars.” Joaquin Phoenix accepted the award on Sir Tony’s behalf, since Hopkins wasn’t there, and the show abruptly ended. Hopkins was reportedly asleep when he won. “Which is not a great sign for network television when they say ‘Hey Anthony – you might win tonight,’ and he’s like ‘eh, I’ll just watch it on YouTube tomorrow,’” Kimmel cracked self-deprecatingly. (Hopkins posted his actual acceptance speech on Instagram early Monday morning.)

The night’s big winner was “Nomadland,” which won Best Picture, Best Director for Chloe Zhao, and Best Actress for Frances McDormand, her third win in the category. “She’s great – absolutely great actress – but whenever she gives a speech, it’s like, you know when on Saturday morning you get a knock on the door, and you think ‘I probably shouldn’t answer that,’ and then you do, and then there’s a couple there to share the good news about Jehovah? And you tolerate it because they seem sincere, and you’re just trying to end the conversation as quickly as possible so you can get back in the house? That’s how Frances McDormand gives an acceptance speech. She’s just not that into it. I wouldn’t be surprised if they found her first two Oscars rolling around in her trunk or something.”

Kimmel has a lengthy history with the Academy Awards. He’s hosted twice before, in 2017 and 2018, and stands to this point as the last person to ever officially emcee the Oscars. It’s a designation he’s often mocked in a self-deprecating fashion (including in a promo that aired during the Oscars telecast on Sunday.)