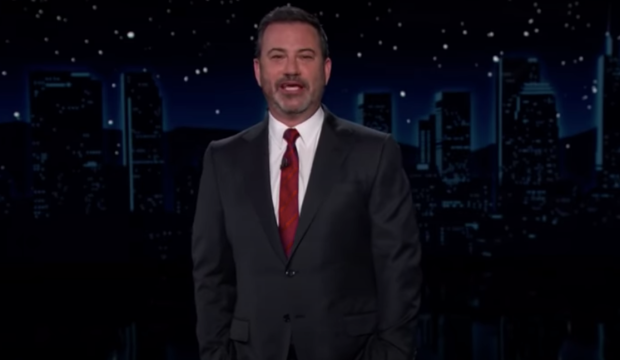 March 4 is apparently an important day in QAnon lore. According to the BBC, the cultish disciples of the conspiracy theory believe Thursday is the day when Donald Trump will somehow reassume the presidency because it’s the date when presidents used to be inaugurated. So Trump has just been biding his time, apparently waiting for the Pope to be arrested? It’s all very strange. Jimmy Kimmel delighted in the absurdity of the theory on Wednesday’s “Jimmy Kimmel Live.”

“Emperor Palpa-teeny-hands will strike back tomorrow,” Kimmel said, mixing a “Star Wars” reference with a long-time joke about former President Trump’s hand size. “Just like he was supposed to on January 6th,” the day of the Capitol riot.

“How many more times are these people gonna prepare for a victory that doesn’t come?” Kimmel wondered. “I don’t know who ‘Q’ is – but he’s definitely a Clippers fan.”

Trump is reportedly weighing a presidential run in 2024, but that’s in the future, not now. “Donald Trump – make no mistake, and I’ll bet anything on it – will not be in the White House tomorrow,” Kimmel said. “He’ll be at Mar-a-Lago, berating the maid for only leaving one McNugget on his pillow.”

There are alternate theories for Trump’s return date, too. Kimmel shared a tweet from Washington Post reporter Dave Weigel, who interviewed a man who thinks Trump’s second coming will occur on March 20. The man said Trump is still in command of the military, and “Biden is acting as President as a ruse while the pope and others are rounded up.”

“So Biden is in on this too?” Kimmel said, adding a fondness for the interviewee. “I would like to be with him on March 21st, the day after his prophecy doesn’t come true. You can always trust a man who wears the flag as clothing.”