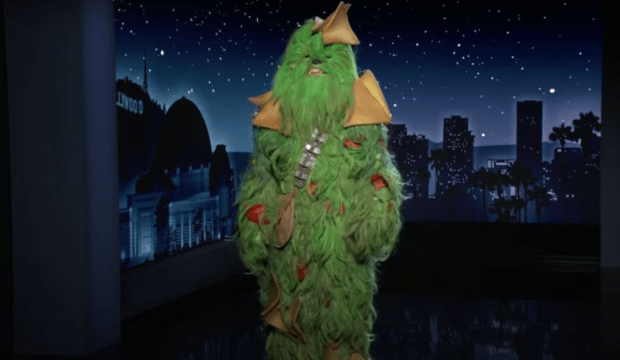 Tuesday was Star Wars Day – you know, “May the fourth be with you.”

Kimmel explained the origin of the fake holiday, which, oddly enough, started when Great Britain’s Conservative Party ran an ad in the London Evening News congratulating Margaret Thatcher on her election to Prime Minister on May 4, 1979. It’s true!

“‘Star Wars’ is a great movie, of course,” Kimmel said of George Lucas’ franchise-starting world-conquerer. “A lot of people call it a Western in space, but to me, it’s the timeless tale of a teenage boy learning to use his penis for the first time. Think about it. He inherits his dad’s lightsaber, and at first, he doesn’t know how to use it. He gets all nervous. And then this weird Uncle shows up in a robe and says, ‘Just close your eyes and let it happen.’ And then he does, and he fires everything he’s got up the cervix of a giant egg called the Death Star and it explodes. It’s just like puberty, really. It’s a classic.”

Kimmel noted that Star Wars Day and Cinco de Mayo are successive days, and so he came up with a way to honor them both at once: a character named “Chewbacca-mole,” a green Wookiee with tortilla chips and tomato chunks stuck to him. A mariachi version of the Star Wars theme played as he walked out. And that was it. He just stood there for a second, then left. Kimmel said that one of the writers said “Chewbacca-mole,” and that’s as far as they got.

Kimmel reminisced about the first time he saw “Star Wars.” He was 9. “My Uncle Frank took us to see it. He fell asleep immediately upon sitting down. Slept through the whole movie and woke up and said it was boring.”

But Kimmel loved it, and now he wants to show the movies to his kids. But he’s not sure what order to play them in. “For me, the first one was the first one, so do I show them that? Or do I show ‘The Phantom Menace’ first since it’s Episode One?  To do it in order, which would make sense – but do I really want to kick things off with Jar Jar Binks? Not really. No.”

Kimmel closed out his Star Wars Day chunk by interviewing Luke Skywalker’s severed hand from “The Empire Strikes Back.” It was very silly.