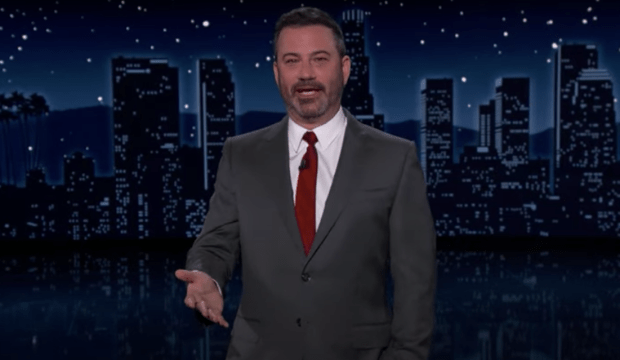 On Monday’s “Jimmy Kimmel Live,” the host welcomed a studio audience for the first time in over a year, and he treated them to some jokes about Donald Trump.

Kimmel talked about a new book called “Nightmare Scenario” about the Trump administration’s mishandled response to the pandemic. As you might expect, the book contains some pretty outrageous stories about what went on inside the White House, including the revelation that early in the pandemic, Trump suggested sending Americans who had been infected with COVID-19 while traveling overseas to Guantanamo Bay – you know, the military prison where America holds terrorism suspects.

“You know he said he wanted to send them to, like, ‘Geronimo Bay’ or something,” Kimmel cracked.

Trump reportedly asked his aides, “Don’t we have an island that we own? We could put people there.”

“Of course, the reality TV star wanted to send them to an island,” Kimmel said. “He’d probably send a camera crew, too. Call it ‘Survirus’’ or something.”

Kimmel continued with “another good McNugget” from “Nightmare Scenario.” Trump was upset about COVID-19 testing because he believed that positive tests would make him look bad and hurt his reelection chances, so he called up then-Secretary of Health and Human Services Alex Azar to find out “what idiot decided to make the federal government do testing.”

“And Alex Azar was like ‘Uh, do you mean Jared?’ It was Jared [Kushner],” the president’s son-in-law, Kimmel said.

“Poor Jared. According to the book, at one point, when Jared found out that the masks the government ordered wouldn’t be ready until June, he got so mad, he yelled at a top official ‘You f-ing moron, we’ll all be dead by June!’ And he threw a pen at the wall, which I imagine went like this,” Kimmel said, doing an impression of Kushner daintily using two fingers to throw the pen. “‘I’ve got a whole box of these Sharpies if you don’t shape up!’”