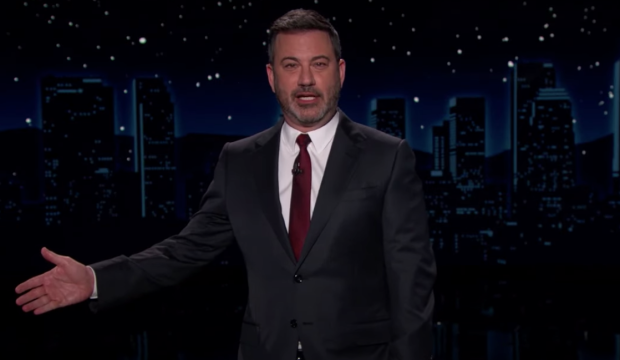 On Wednesday, conservative talk radio provocateur Rush Limbaugh died of lung cancer at age 70. At the end of his life, Limbaugh was one of former President Donald Trump’s staunchest supporters, and Trump rewarded him the Presidential Medal of Freedom in 2020.

Trump called into Fox News to eulogize his friend – one of the first times we’ve heard his voice since he left the White House – and of course made it about himself, which Jimmy Kimmel found funny. On Wednesday’s “Jimmy Kimmel Live,” the host played a clip from Trump’s Fox News call, when the twice impeached commander-in-chief took a long digression from what he was supposed to be talking about to remind everyone that he won the election, by a lot.

“Rush thought we won – and so do I, by the way,” Trump said, once again making his false claim of election fraud. He continued to gripe about how the election was stolen from him for several more seconds, playing his greatest rhetorical hits like “a lot of people are saying” and “they feel that way very strongly.” Eventually, he claimed there would have been riots if what happened to him happened to a Democratic candidate.

Kimmel noted that the Fox News hosts tried to keep Trump on topic (there may be legal trouble for them if they didn’t), but he kept bringing it back to complaining about how he feels like the election was stolen from him and how unfairly he was treated.

“Well, I have to believe that listening to Trump blather on nonsensically about himself is what Rush would have wanted,” Kimmel said.

To be fair, Trump did actually talk about Limbaugh during the call, saying the broadcaster was a “legend” and a “great man.”

Elsewhere in his monologue, Kimmel talked about Catholic churches getting creative with how they do Ash Wednesday during the pandemic and Tucker Carlson making false claims about windmills causing blackouts in Texas, among other topics.