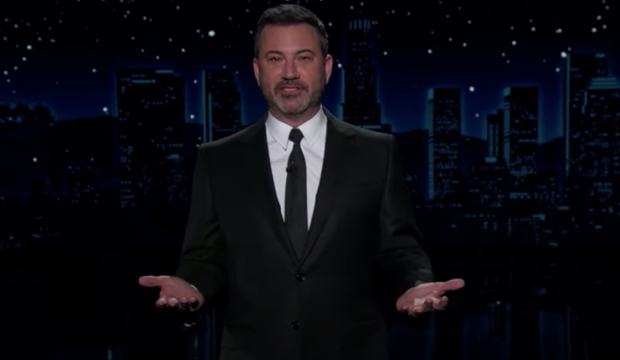 Former President Donald Trump’s second impeachment trial begins Tuesday, with senators arguing over whether or not it’s constitutional to try a former commander-in-chief. Should the trial proceed, which it is expected to, Democrats will argue that Trump incited a riot when his supporters stormed the Capitol on January 6.

Sadly, Trump is not expected to testify during the trial. “Donald Trump doesn’t like to put his hand on a Bible unless peaceful protesters are being gassed nearby,” Jimmy Kimmel cracked during his monologue Monday night.

Trump’s defense is basically going to be that he was not responsible for anything and it was no big deal, and his supporters will go along with that. “The vast majority of Republicans in the Senate appear poised to give Liger Woods another mulligan,” said Kimmel. “They said two things: number one, impeaching Trump is unconstitutional because he’s no longer in office.  Which is like, ‘Your honor, Bernie Madoff is no longer running a Ponzi scheme. Can’t we just leave the man alone?’”

Number two, Kimmel added, “His lawyers are saying he’s not responsible because people should have known he was using hyperbole when he told them to ‘fight like hell.’ Yeah, the guy in the Viking costume and the lady with the words ‘Camp Auschwitz’ printed on her XXXL sweatshirt should know what ‘hyperbole’ is. Right.”

Elsewhere in his monologue, Kimmel talked about Tom Brady winning yet another Super Bowl and the weird commercials that aired during the game, and how quiet things have been with Joe Biden in the White House instead of Trump.