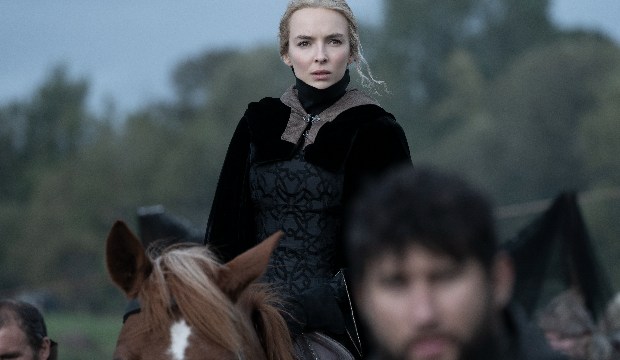 Two years ago, Jodie Comer won an Emmy for her intoxicating portrayal of the villainous antiheroine Villanelle in BBC America’s “Killing Eve”. She beat out the likes of not only past Emmy champs Viola Davis and Laura Linney, but also her own co-star Sandra Oh, who many predicted would triumph over the English newcomer.

Comer could go from Emmy glory to Oscar recognition this year with her acclaimed starring role in Ridley Scott’s medieval epic “The Last Duel.” She portrays Marguerite de Carrouges, a fiercely defiant woman who sacrifices her own life for the sake of truth. She attempts to bring justice upon a charming but untrustworthy squire, Jacques le Gris (Adam Driver), whom she accuses of brutally assaulting her within the confines of her own chamber while her husband, Jean de Carrouges (Matt Damon) was selfishly away in Paris.

While the film’s first two chapters place Comer’s character on the relative periphery, the final chapter brings Marguerite into full focus. Comer is in nearly every shot and becomes a dominant force during the film’s final act. Her performance reaches a heartbreaking climax during the titular combat. Her fearlessly vulnerable portrayal of trauma makes her an strong awards contender. Critics have been raving about the her tour-de force performance:

“Comer is quietly tremendous […] she makes you feel every last crunch of its gears” (Robbie Collin, The Telegraph)

“Through Comer’s intelligent, fiercely empathetic performance, Marguerite becomes the movie’s conscience, one who forges a direct link between the injustices of the past and those of the present.” (Justin Chang, Los Angeles Times)

“she shines so brightly on screen she eclipses everyone else” (Katie Walsh, The Sun Chronicle)

“she is the beating heart of the film and also its revelation, holding all three sections together.” (Kevin Maher, The Times)

“Comer is sensational. Her Marguerite is vulnerable yet strong, frightened but won’t be quietened.” (Deborah Ross, The Spectator)

“The Last Duel” boasts a healthy 87%, certified fresh rating on Rotten Tomatoes. Ben Affleck, who also co-wrote the script, has also been singled out for his scene-stealing supporting turn as the delightfully wicked Count Pierre d’Alençon. That praise also helps Comer’s chances as the acting branch has another reason to watch her film. Recall that last year Vanessa Kirby was nominated for her lead role in “Pieces of a Woman,” which also featured Ellen Burstyn. The presence of this respected screen veteran likely helped the relatively smaller film increase its visibility among the large acting branch.

Do you think Comer will be nominated?

Jared Leto takes his biggest swing yet in 'House of Gucci': 'It was a beautiful, unforgettable journey'…