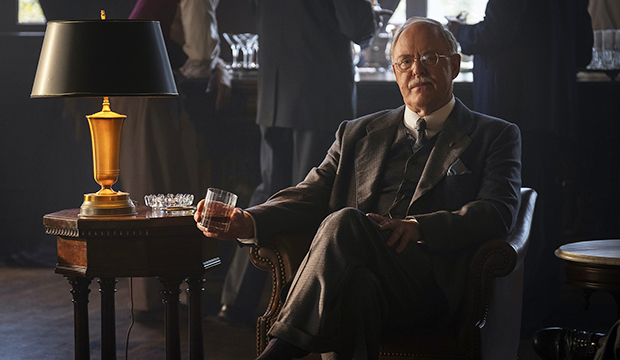 Another longtime Emmy record could fall this year. Well, it could be tied anyway. John Lithgow is nominated for Best Drama Supporting Actor for his turn as Elias Birchard “E.B.” Jonathan on HBO’s 1930s-set remake of “Perry Mason.” Should he walk away a winner come Sept. 19, he’ll tie the great Ed Asner as the most awarded male performer ever with a total of seven Emmys.

Lithgow is just one of two actors from the drama series to have been nominated for an Emmy. The other is also a former winner: Matthew Rhys, who portrays the eponymous defense attorney and is nominated in Best Drama Actor. On the show, which received fairly positive reviews when it debuted but only nabbed four total Emmy bids, Lithgow’s Jonathan is an aging lawyer who acts as a father figure and mentor to Mason.

Skilled at both comedy and drama, Lithgow has received a total of 13 Emmy nominations over the course of his career. He received his first nomination in 1984 (Best Supporting Actor in a Limited Series or Special, as it was known then, for “The Day After”) and seemingly never looked back. He is now the recipient of six Emmy Awards, having earned three Best Comedy Actor Emmys (1996, 1997 and 1999) for his performance as Dick Solomon, an alien attempting to pose as a human, on the popular NBC series “3rd Rock From the Sun.” Lithgow was nominated a total of six times during the show’s run, and Solomon is still probably his best known role. But he also has two Best Drama Guest Actor Emmys to his name — the first was awarded in 1986 for his turn on NBC’s “Amazing Stories” and the second came in 2010 for playing Arthur Mitchell, aka the Trinity Killer, on Showtime’s “Dexter.” His most recent Emmy win came in 2017 for his supporting role as Winston Churchill on Netflix’s royal drama “The Crown.” To this day, Lithgow is one of only two “Crown” actors to have won for their performance, the other being Claire Foy.

Currently sitting in fifth place in Gold Derby’s combined Emmys odds, Lithgow is trailing Michael K. Williams (“Lovecraft Country”), Tobias Menzies (“The Crown”), Giancarlo Esposito (“The Mandalorian”) and Bradley Whitford (“The Handmaid’s Tale”). Rounding out the rest of the field are O-T Fagbenle (“The Handmaid’s Tale”), Chris Sullivan (“This Is Us”) and Max Minghella (“The Handmaid’s Tale”). Although Williams has been the odds-on favorite from the jump, the supporting drama actor category isn’t completely locked up the way some of the others are. Working in Lithgow’s favor is the fact he is a well-known actor with a strong Emmy record and an excellent showcase. But he’ll have to overcome the fact that “Perry Mason” has vastly underperformed. And it certainly does not help that he is the only nominee whose show didn’t also receive a nom for Best Drama Series, but that did not hurt Billy Crudup (“The Morning Show”) last year.

Still, should Lithgow triumph over the rest of the field, he’ll tie the legendary Asner, who won five Emmys for portraying Lou Grant on two different shows. He won three supporting comedy actor awards while on “The Mary Tyler Moore Show” and then took home two drama actor statuettes for its spin-off “Lou Grant,” which saw the character become an editor at the Los Angeles Tribune. With those wins, Asner became the first performer to take home both a comedy and a drama Emmy for playing the same character. His other two Emmys were for “Rich Man, Poor Man” (Best Lead Actor for a Single Appearance in a Drama or Comedy Series, 1976) and “Roots” (Best Single Performance by a Supporting Actor, 1977).

With Lithgow’s successful record across both comedy and drama, he’s a perfect, if somewhat unexpected, candidate to challenge Asner’s record. It also makes the supporting drama actor race much more exciting than it appears to be on the surface. But even if Lithgow does tie Asner, they’ll both still be behind the two most decorated performers in Primetime Emmy Awards history: eight-time champs Cloris Leachman and Julia Louis-Dreyfus.