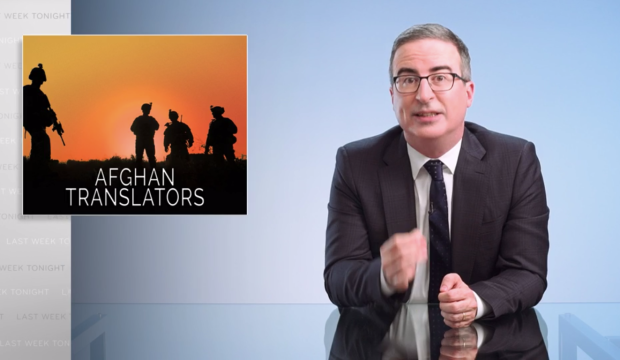 John Oliver opened Sunday’s “Last Week Tonight” by briefly talking about a problem with the American military’s ongoing withdrawal from Afghanistan, which is scheduled to be completed by August 31. Afghan translators who assisted American troops throughout the war were promised visas to come to the United States, and the Biden administration is coming up short on that assurance. The translators are calling on the president to cut through the red tape and grant them special visas quickly because the Taliban has killed more than 300 of them or their family members for “treason.”

Oliver criticized Biden for a recent speech in which the president didn’t take enough responsibility for the translators’ fates. “There is a home for you in the United States, if you so choose, and we will stand with you, just as you stood with us,” Biden said.

“It’s clearly not so much their choice as it is ours,” Oliver said in response to the clip. “We are the ones in charge of the process. So putting the choice on the applicants is basically a surgeon handing you a scalpel saying, ‘there is a tumor-free pancreas in your body if you so choose and I will stand with you.’ I think you might be fundamentally confused about who has power over the outcome here.”

Some translators have been waiting for years since they applied for visas to hear whether or not they’ll be allowed into the country they risked their lives to assist. “I don’t want to be left behind,” one translator said during a “60 Minutes” highlighted by Oliver. The host said America can’t let that happen to the translators, because it could very well mean their deaths. “Being left behind in this context is even worse than seeing ‘Left Behind,’ the 2014 Nicolas Cage faith-based thriller about the second coming that boasts – and this is true – a solid 1% on Rotten Tomatoes. Clearly, there aren’t many things worse than seeing ‘Left Behind, but I’m going to say getting abandoned to be murdered by the Taliban is definitely one of them.”

Oliver saved his harshest words for Senator Rand Paul, who questioned whether we need to let the translators come to America and said they should stay and fight for their country. “[That’s] pretty rich coming from a guy who couldn’t even win a fight against his neighbor on his own front lawn,” Oliver said.

Oliver closed by saying it’s “inexcusable” that America is just now scrambling to come up with a plan to help these translators when we’ve had 20 years to come up with one. And we have to get them out of Afghanistan quickly, because the threats of violence they’re facing are serious.

The episode’s main story is about emergency medical services and is available to watch on YouTube. The full episode is available on HBO Max.

John Oliver smacks down O.J. Simpson for weighing in on Will Smith slap