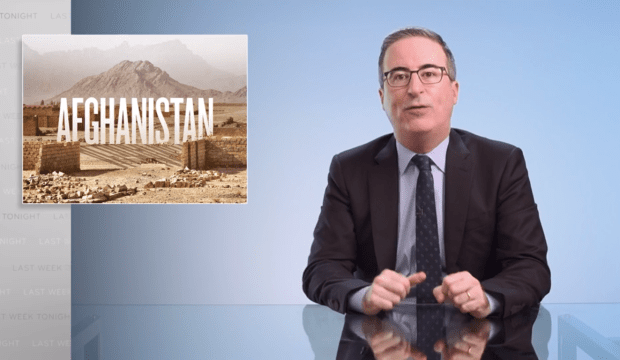 On Sunday’s “Last Week Tonight,” John Oliver devoted his entire show to America’s necessary but disastrous pullout from our 20-year-long war in Afghanistan. “We all knew the end was likely to be ugly. The only question was, how ugly?” the host said. “Well, this week, we got our answer.” He then played some news clips of desperate Afghan citizens swarming the Kabul airport trying to escape.

“The fact is, America has now joined a long line of countries who came to Afghanistan to serve their own interests only to leave defeated,” Oliver said. “It’s a pattern so universally known that it was literally a plot point in ‘Rambo III.’”

In the chaos of America’s exit, Oliver tried to answer three questions: “Why were we in Afghanistan in the first place, what did we do while we were there, and what are we doing right now?” The answers are A) revenge for 9/11 that evolved into an ill-advised attempt at nation-building that killed thousands of civilians and traumatized a generation of Afghan children, B) installed a corrupt government incapable of effectively managing the country and gave billions of dollars to defense contractors to spend on wasteful, destined-to-fail projects, and C) abandoning the Afghan people to Taliban rule, with billions of dollars worth of weapons given to the collapsed Afghan military now in the Taliban’s hands.

Oliver said that America’s responsibility now is to honor the promise we made to protect Afghans who aided us and help them take refuge here. And he had strong words for the “racial panic goblins” on Fox News warning against taking Afghan refugees in. “We are a big part of why those people are refugees,” Oliver said. “Helping them now isn’t charity, it’s doing the bare minimum. Refusing to help a neighbor whose home just burned down is sh—y. Doing it when you helped start the fire is f—ing monstrous.”

And Oliver holds President Joe Biden responsible for this failure, too, in his “failure to plan” and “continued indifference to the lives of anyone who’s not American.” Last year during his campaign, Biden said he would bear no responsibility for the Taliban retaking Afghanistan in the wake of America’s exit because his responsibility is to keep Americans safe and not fight every battle around the world.

“If Biden wants to argue for isolationism going forward, he is welcome to do that,” Oliver said. “But what he can’t do is use that as a justification to dismiss the fates of people in whose country we’ve already disastrously intervened. Because we have a non-zero duty at this point to do everything we can to help them, and that means getting as many people out as we can.”

The other thing we have to do is get comfortable with “the quintessentially un-American idea” that we can’t control everything. “Assuming that we can go into another country and fix everything by imposing our will is largely what led us to where we are right now.” Oliver says it’s time to end American imperialism and be involved by working to alleviate the humanitarian crisis.

John Oliver smacks down O.J. Simpson for weighing in on Will Smith slap