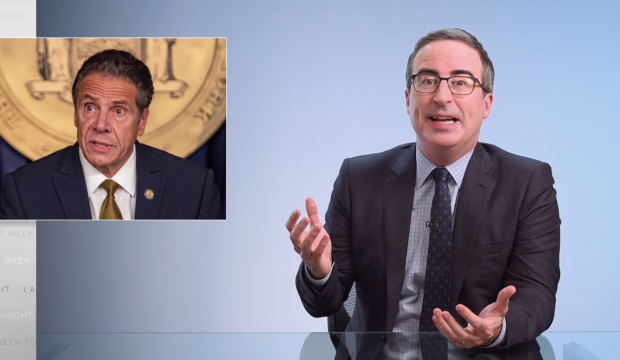 After basking in adulation early in the pandemic, the wheels are coming off for New York Governor Andrew Cuomo, who is currently embroiled in twin scandals. One is that his administration underreported COVID-19 deaths in nursing homes to federal authorities; the other is that he allegedly sexually harassed staffers.

“At work sometimes I think I am being playful and make jokes that I think are funny,” Cuomo said in a statement on Sunday about the harassment claims. “I do, on occasion, tease people in what I think is a good-natured way. I do it in public and in private. You have seen me do it at briefings hundreds of times. I have teased people about their personal lives, their relationships, about getting married or not getting married. I mean no offense and only attempt to add some levity and banter to what is a very serious business.”

But despite his words — and a successful book about his handling of the coronavirus pandemic, not to mention an Emmy Award — “Last Week Tonight” host John Oliver was not at all surprised to find Cuomo embroiled in controversy.

New York Assemblyman Ron Kim said that after he spoke out against Cuomo for the way the governor and his administration allegedly under-reported nursing deaths, Cuomo called Kim at home and threatened him — an allegation Cuomo denied. But Oliver said that many people who have dealt with Cuomo say that’s exactly the kind of thing he would do. “That reputation alone goes a long way,” Oliver said. “Because be honest, if you saw a headline tomorrow that said, ‘Leaked Memo Shows John Oliver Asked Staff If Bird He Saw in Central Park Had an Onlyfans Page, you’d believe it, even if I denied the account of that conversation because it sounds like something I’d do.”

Oliver also expressed distaste with Cuomo’s positioning of himself as the hero of the pandemic. “Even before the current scandals, there was something gross about Cuomo’s glee in his public adulation last year, from his constant appearances with his brother [host Chris Cuomo] on CNN, to him co-signing on the term ‘Cuomosexuals’ – the only sexual orientation, by the way, it is completely acceptable to discriminate against – to the book that he published last October about the lessons he learned from handling the still-ongoing pandemic, which were presumably, one, do press conferences, two, the end,” Oliver said.

Oliver also pointed out a bizarre, inappropriate running joke Cuomo does in his press conferences where the governor quotes a writer named A.J. Parkinson. Only there is no A.J. Parkinson, and the supposedly wise quotes are completely made up. A.J. Parkinson was a running joke Cuomo’s father, former New York Governor Mario Cuomo, had with the Albany press. “Although that may have been charming at the time, the current Cuomo doing it during a pandemic when virtually no one gets that it’s a joke is a pretty weird move,” said Oliver. In his press conferences, Cuomo always brags about how he’s giving the people all the facts, but it turns out he’s attributing quotes to someone who doesn’t exist. Oliver said that spouting fake quotes isn’t the worst thing Cuomo has done, “But it does feel like a pretty apt metaphor for an administration that has aggressively managed facts to fit its chosen reality.”

Oliver closed out his monologue with a quote from writer T.J. Pimpernickle: “Andrew Cuomo is a colossal a–hole.”

“I can tell you two things about T.J. Pimpernickle,” Oliver said. “One, he is a person I totally made up, and two, he’s also completely right about Andrew Cuomo.”