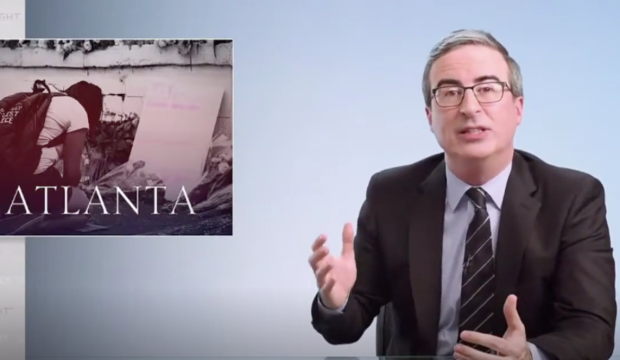 In the wake of the Atlanta spa murders last week, in which several Asian women were killed by a white man, John Oliver devoted the opening segment of Sunday’s “Last Week Tonight” to the topic of anti-Asian racism. According to the group Stop AAPI Hate, there have been more than 3,795 hate-related incidents against Asians in America during the past year, a stark number that spiked on the heels of former president Donald Trump’s inflammatory rhetoric against China, which he blamed for the coronavirus. But while the messaging from the White House has changed since President Joe Biden took office, Oliver did reject Biden’s statement last week when he called hate crimes against people of Asian descent “un-American.”

“To say that they are ‘un-American’ – I would love to visit the nation that exists in Joe Biden’s head,” Oliver said. “Because it’s a place where racism is ‘not who we are’ and racial attacks against Asians are somehow ‘un-American,’ despite the fact that – and far be it from me to explain this to someone who seems like he’s lived through most of American history – anti-Asian racism has long been a fact of American life.” Examples Oliver gave include the treatment of Chinese railroad workers in the 1800s, the internment of Japanese-Americans during World War II, to the 1982 murder of Vincent Chin, where Chin’s white assailants claimed they were not motivated by race, just like the suspect in the spa murders, who was having a “bad day,” according to the county sheriff who briefed the press on his arrest. Oliver said that not only is anti-Asian hate a fact of American life, so is denying that it’s racist.

“Our long, ugly history of anti-Asian racism and the fact that it often peaks during times of crisis is the exact reason why, just last year, many were loudly warning that Trump calling COVID names like the ‘China virus’ was likely to lead to a rise in violence against people of Asian descent,” Oliver said. “An argument that not everyone, at the time, seemed to find convincing.”

Oliver then rolled a clip of “The View’”s Meghan McCain from last year saying she didn’t “have a problem” with people calling COVID-19 names that associate it with Asia.

“Oh good, Meghan McCain doesn’t have a problem with it!” Oliver said. “Listen not to the scores of Asian Americans telling everyone that the term is dangerous and offensive. Instead, gather around and take the word of a wealthy white woman who’s dressed like she’s about to lay off 47 people over Zoom.”

“Now, I will say, Meghan McCain posted this week, ‘Stop Asian Hate,’ with three broken hearts emoji, which is a fine sentiment to throw up on Twitter after the fact,” he continued. “But there has to be an understanding that saying, ‘I don’t have a problem with calling it the China virus’ is very much giving space for hate to grow.”

Oliver also said that the killer blaming Asian women who worked in massage parlors for his “sex addiction” was further evidence of racism. “The fact the killer chose these particular women working low wage jobs as targets for his ‘sex addiction’ speaks to how Asian American women, in particular, have to deal with hypersexualization and how Asian workers to the extent that they are seen at all are seen more for the labor that they provide rather than the full three-dimensional humans that they are.”